The Humanitarian Environmental Analysis Team, or H.E.A.T., is a fictional organization featured in Godzilla: The Series. It was formed by Niko Tatopoulos after the destruction of the first Godzilla, to fight and study the mutations that kept appearing all over the world.

Dr. Niko "Nick" Tatopoulos is the leader of H.E.A.T. and the adopted father of the second Godzilla. He has a very good reputation for his pivotal role in saving New York from the original Godzilla and its offspring. Nick discovered Godzilla's only surviving egg while searching Madison Square Garden, and the hatchling imprinted on him. Nick decided to raise the new Godzilla, seeing him as posing no threat to humanity and potentially being a valuable asset in battling other mutations across the planet.

Monique Dupre is Vietnamese/French in nationality and is Philippe Roaché's best agent in the French Secret Service. She specializes in hand to hand combat and infiltration. Originally, her mission was to have the new Godzilla killed, but she had a change of heart after the monster saved her. Despite her cold demeanor, she does have a (somewhat) softer side to her. Despite her help to the H.E.A.T. team, Monique will independently investigate any military facility without Nick's permission.

Randy Hernandez is an intern working under Nick. Hugely talented in all fields of technology, his slacker image has reduced him to nothing more than an immature hacker. Other than Nick, Randy is the member of H.E.A.T. who most accepts Godzilla, and can be defensive at times. He was expelled from Empire State, but was inspired to attend college once again after saving Godzilla from Cameron Winter. He has a crush on Monique, but is always shot down. Randy learned the Navajo language because it was the only code that wasn't broken during World War II.

Dr. Mendel Craven is a bit of a coward and apparently allergic to everything around him, but is nevertheless a competent member of the team. He has had a serious crush on Elsie ever since the two of them investigated the first Godzilla's landfall in Panama. As the team's engineer, his role consists primarily in dealing with robotics and other machinery, although he has also shown himself an adept chemist in times of need. Mendel constructed H.E.A.T.'s robotic assistant, N.I.G.E.L., although Randy heavily modified its personality.

Dr. Elsie Chapman is one of the original members of Nick's team. She is very cynical, and often acts sarcastic to get a laugh from Nick. In addition, she has developed an attraction to Mendel. She specializes in studying the behavior of Godzilla and other mutations.

N.I.G.E.L. is an acronym for Next millenium Intelligence Gathering Electronic Liaison. An analysis robot created by Mendel, N.I.G.E.L. was reprogrammed by Randy to have a more cheerful personality. He is destroyed in almost every episode (and subsequently rebuilt, it is to be assumed). N.I.G.E.L. is apparently capable of speech, such as in the episode, Where is Thy Sting?, where N.I.G.E.L. says, "I'm outta here!" when Ts-eh-go stabs and throws him. N.I.G.E.L. also contains small capsule-sized robots that can film from the eye-camera.

Godzilla is the only surviving offspring of the first Godzilla. Due to Nick's presence at his hatching, this Godzilla has imprinted on Nick as his parent. As a result, Godzilla is very protective of him, and Nick has the ability to control him to a certain extent, which comes in handy when the team needs help fighting other giant monsters. He differs from his father in many ways. This Godzilla cannot reproduce asexually like his parent, and appears to be sterile. This Godzilla can breathe powerful blasts of green radioactive fire, unlike his father who could only breathe strong flammable gusts of wind. Whereas the first Godzilla would run from danger, this one faces it head on and battles his foes to the death, risking his life and suffering serious injury multiple times. Nick also notes that this Godzilla displays more intelligence than his father, who acted primarily on instinct. This Godzilla displays loyalty to Nick and his allies, strategic thinking, and even the ability to make moral decisions. Godzilla's face is also featured on H.E.A.T.'s logo. 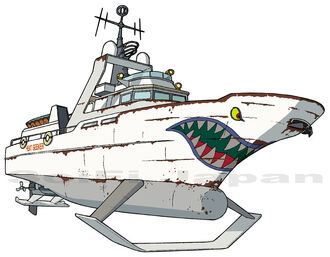 The H.E.A.T. Seeker is a rusty old ship used by the H.E.A.T. team. The Seeker contains many features including a sleeping area and even a laboratory. In the second episode of the series, Randy painted an intimidating shark-like face on the front. The Seeker is usually contained in the H.E.A.T. base and only used for overseas transport.