Jet Jaguar (ジェットジャガー,   Jettojagā?) is a heroic mecha created by Toho that first appeared in the 1973 Godzilla film, Godzilla vs. Megalon.

Jet Jaguar was the result of a contest Toho had in mid-to-late 1972 for fans to come up with a new hero for them to use, to capitalize on the many tokusatsu, anime superhero and super robot shows that were very popular at the time.

The winner of the contest submitted the drawing of a robot called Red Alone (レッド·アローン,   Reddo Arōn?). The robot resembled both Ultraman and Mazinger Z (both of which were very popular). The robot's design was altered and it was renamed "Jet Jaguar" and was set to star in its own film, titled Jet Jaguar vs. Megalon, which pit him against Megalon.

However, Toho figured Jet Jaguar would not be able to carry the film on his own, in screen appearance or marketing value, so during pre-production, the project was shut down for several weeks, until screenwriter Shinichi Sekizawa was called in to rewrite the script to add Godzilla and Gigan. The resulting film, Godzilla vs. Megalon, paired Godzilla with Jet Jaguar against both Megalon and Gigan.

Jet Jaguar doesn't possess a roar, but instead, unleashes a bunch of mechanical or electronic sounds during his screentime.

It is revealed that Jet Jaguar gained sentience and is capable of altering his programming in Godzilla: Unleashed. Jet Jaguar fights to protect others, and acts very much like a superhero. When not fighting, he is shown to be very friendly towards others, offering handshakes, and even carrying a child on his shoulders.

In Godzilla vs. Megalon, Jet Jaguar was created by scientist Goro Ibuki.

Jet Jaguar was a human-sized robot created by inventor Goro Ibuki for unknown reasons. Having been stolen by the underground nation of Seatopia, Jet Jaguar's mission was to guide Megalon to Tokyo so the insect kaiju could destroy it. Eventually, however, Goro regained control of Jet Jaguar and sent him to fetch Godzilla from Monster Island. As Godzilla made his way to Japan, Jet Jaguar flew back to the mainland and faced Megalon.

Increasing his size to fifty meters, Jet Jaguar attacked Megalon and was winning the battle until the cyborg Gigan arrived to provide Megalon some back-up. The two evil beasts were too much for Jet Jaguar, who was beaten senseless until Godzilla arrived. After a long fight, Godzilla and Jet Jaguar were able to defeat their foes, sending Megalon back to Seatopia and Gigan back into outer space. After the fight, Jet Jaguar reverted to his normal size, and returned to his home with Goro.

The 2014 Godzilla video game states that Jet Jaguar can fly at mach 3.5.

Jet Jaguar's eyes also contain two spotlights, and he uses these to blind opponents or search for nearby humans or kaiju.

In Godzilla: Rulers of Earth, Jet Jaguar's intelligence and resilience are emphasized greatly. He is able to control Kiryu like a human pilot, and is able to defend against attacks that would normally critically damage or destroy the other mechs. He is also shown to be highly resourceful, demonstrated when he repurposed a ship's anchor into a makeshift flail against the Trilopods in Godzilla: Rulers of Earth.

He is also able to carry incredibly heavy objects and even fly whilst being weighed down by Godzilla riding on his back.

He is also shown to be able to knock Godzilla out with a single blow to the face, despite being struck at point blank range by Godzilla's atomic breath.

The mechanical hero has the ability to alter his size at will. He has also been shown growing larger than his film appearance in the Atari trilogy, rivaling Biollante's height, but being this size makes him very slow.

During developments, Jet Jaguar was planned to spray liquid nitrogen from mouth, but was not made into movie.

During developments, Jet Jaguar was planned to emit COMJAM, but was not made into movie.

Beam and sword and missile attacks

Outside of his film appearances he can fire beams from his arms along within missiles, similarly to Ultraman. In Godzilla: Save the Earth, the beam is rather sphere-shaped. In one of old stills, Jet Jaguar was seen using a sword of light.

In Godzilla: Trading Battle Jet Jaguar can release an "explosion breath" from his mouth.

Jet Jaguar card from Godzilla: Trading Battle
Add a photo to this gallery

Jet Jaguar has also appeared in the video game Godzilla: Save the Earth and Godzilla: Unleashed, where he can increase his size further to 1.5 times normal kaiju size.

Jet Jaguar in Godzilla: Save the Earth
Add a photo to this gallery

In Godzilla: Unleashed, he can release a concentrated blast of energy from his wrists, and from the game's predecessor, Jet Jaguar can spin himself around at extreme speeds, creating a deadly tornado; and while in his smallest combat form, Jet Jaguar has a Reflection Shield put up at all times, meaning that he can't be harmed by weapons, and can even perform a Weapon Reflect, in which he can block a weapon to bounce it back at its source.

In the PS3 version, Jet Jaguar appears as a boss in Area 12 on Stage 5 if the G-Generators are not destroyed fast enough. He may also appear on other levels as a random boss. He attacks using melee attacks. He has a custom theme, and a cutscene of him shaking Godzilla's hand is played after he is defeated three times.

In the PS4 version, he can be encountered on 3 stages with special conditions. He can also only be encountered the first time as Godzilla. If the player destroys the area to between 50% and 65%, and then destroys the generator, Jet Jaguar will appear. He can appear in:

The destruction level applies for all areas.

Jet Jaguar in Godzilla: Kaiju Collection
Add a photo to this gallery 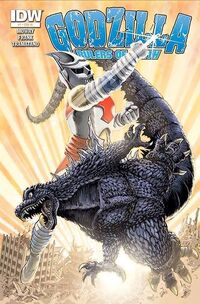 Jet Jaguar appears in Godzilla: Rulers of Earth. Jet Jaguar appeared to help Godzilla to fight against Orga and Gigan. After flying into Orga's mouth and expanding in him, causing Orga to explode. When Godzilla inspected Jet Jaguar, he tried blasting Jet Jaguar with his atomic breath, but managed to make Godzilla to turn his attention on Gigan. While Godzilla was distracted, Jet Jaguar noticed that Orga was trying to regenerate his entire body and so he set out to stop the kaiju, but ultimately failed. After Godzilla defeated Gigan, he becomes enraged and attacked Jet Jaguar by firing his atomic breath at point blank range and smacked the robot with his tail, but was knocked out after Jet Jaguar punched Godzilla's face. Eventually, Jet Jaguar flew to the Cryog ship to help Steven Woods and Chavez, but not before throwing Godzilla out to sea.

In Godzilla: Rulers of Earth #12, Jet Jaguar fought Destoroyah, even shrinking to human size, then piloting Kiryu to fire the Absolute Zero Cannon, killing Destoroyah. He then attempted to stop the humans from setting off underwater explosives while Godzilla was in the area, but did not make it in time.

Jet Jaguar then disappeared for several years, but reemerged when the Trilopods attacked the Earth. Jet Jaguar traveled to Los Angeles to assist Godzilla in the battle against the creatures and fought against a Trilopod that had taken on Godzilla's characteristics, but was nearly destroyed by it. Thankfully, Jet Jaguar was saved by Zilla, and joined with Godzilla and his allies to defeat the Trilopods. At some point in the battle, Jet Jaguar managed to attack Gigan and defeat the cyborg monster. After Godzilla destroyed Magita, Jet Jaguar observed Godzilla and the other monsters traveling out to sea, following them from a distance. Jet Jaguar was last seen human-sized being repaired in Dr. Ando's office.

This is a list of references for Jet Jaguar. These citations are used to identify the reliable sources on which this article is based. These references appear inside articles in the form of superscript numbers, which look like this: [1]

Retrieved from "https://godzilla.fandom.com/wiki/Jet_Jaguar?oldid=391373"
Community content is available under CC-BY-SA unless otherwise noted.