Jiger (ジャイガ,   Jaigā?) is an ancient kaiju created by Daiei that first appeared in the 1970 Gamera film, Gamera vs. Jiger.

Jiger is a horned quadrupedal reptile somewhat reminiscent of the extinct dinosaur Triceratops. Unlike Triceratops, however, Jiger has a dorsal sail, two nose horns and a single forehead horn.

Jiger is a reptilian, dinosaur-like monster that resides on Wester Island, a landmass in the Pacific Ocean that is home to a primitive native tribe. Jiger is kept in a state of hibernation by the "Devil's Whistle", a mystical statue of unknown origin that is fiercely guarded by the Wester Island natives. Removal of the statue from the island awakens Jiger from her sleep.

A version of Jiger is also featured briefly in a panel of the manga remake of Gamera vs. Barugon. Alongside Iris, Barugon, and Zigra, this Jiger is described as being a genetic creation of the Atlanteans made to combat the Gyaos before being cast aside for Gamera.

After workers from the World's Fair remove a statue embedded in an island, Jiger makes her first appearance and immediately gains Gamera's attention. The first of several fights ensues, resulting in a victory for Jiger through her use of the projectile quills in her face. The quills impale Gamera's arms and legs, knocking him onto his back and preventing movement. Furthermore, the quills pierce the limbs in such a manner that Gamera is unable to withdraw his limbs into his shell and take flight. This frees up Jiger to continue her pursuit of the statue, which is making a horrible ringing sound that causes her tremendous pain.

Jiger lets nothing impede the hunt for the statue, splitting two ships in half before tearing through Osaka in pursuit. In the midst of chase, Jiger displays another weapon: a heat ray capable of vaporizing not only flesh, but entire city blocks. The J.S.D.F. makes a tentative effort to kill the monster through deployment of F-104 fighters, but they are promptly shot down with her quills and the deployment is brought to a halt.

Eventually, Gamera makes his return, having freed himself from the quill trap. He proceeds to engage in combat with Jiger, appearing to have the upper hand until Jiger pulls Gamera in close. Upon securing her grip, Jiger extends a stinger from her tail and inserts the barb into Gamera's chest, laying an egg inside his lung; this prompts Gamera to retreat back to the bay, where his body takes on a chalk white color reminiscent of ice. With her opponent presumably indisposed, Jiger heads directly to the World's Fair, where she finally manages to acquire the statue. Upon successfully locating her target, Jiger proceeds to throw it into the ocean, silencing the painful ringing. Gamera is presumed to have been killed at this point as Jiger heads straight to the World's Fair.

Jiger can shoot deadly saliva-compacted quills from the corner of both sides of the nose known as the Solid Saliva Missiles (唾液固形ミサイル/Daeki Kokei Misairu), which stop Gamera's movements by skewing his hands and feet with those quills, making it impossible for Gamera to retract into his shell.

She can also fly by means of jets in the back of her head.

Jiger fires an Ultrahigh frequency ray in the shape of a curve from a single corner of her head, known as the Magnetium Beam (マグネチューム光線/Magunechyumu Kosen) that is capable of dissolving buildings and ships and even people till the bones.

Jiger possesses a needle or stinger of the fallopian tube at the end of the tip of her tail. Despite not being actually venomous, the stinger is used by Jiger to reproduce in ways similar to insects, in that it can be used like an ovipositor to implant an egg into a victim that feeds off the victim's blood when it hatches, and this ability is known as Bloodsucking Strategy (吸血戦法/Kyuketsu Senpo). In addition, Jiger can put her eggs inside other creatures, such as Gamera, which parasitically lives off the host up until it hatches. And from the fact that it's effects make the head and arms or front legs from her victims like Gamera to be seen through, it is also known as the Transparent Strategy (スケスケ戦法/Sukesuke Senpo).

Jiger has a suction ability provided on the back of both fore and aft feet known as Magnetic Sucker (マグネチック吸盤/Magunechikku Kyūban) which is one million times the suction power of a vacuum cleaner, and it lets her to pull objects to her and draw away from her too. A similar ability is called Certain Kill Air Rotation Throw (必殺空中回転投げ/Hissatsu Kūchū Kaiten'nage) when Jiger throws onto Gamera's shell before injecting her needle or stinger on him.

Jiger can not stand the Devil's Whistle and it causes her great pain. The statue was specifically built to keep Jiger at bay.

Jiger's roars actually originate from the screeching roars of another Gamera kaiju, Barugon. 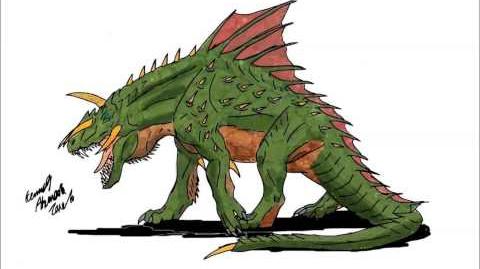