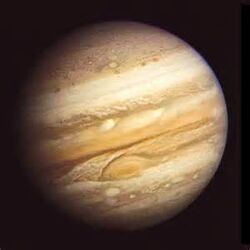 Jupiter (木星?, Mokusei) is the largest planet in our Solar System and is the fifth closest to the Sun. Jupiter is referenced and appears in several of Toho's Godzilla series and other tokusatsu movies.

Planet X is specified to be somewhere between Mars and Jupiter by the Xiliens. Planet X is very close to Jupiter, with the gas giant covering most of the planet's night sky.

Retrieved from "https://godzilla.fandom.com/wiki/Jupiter?oldid=275958"
Community content is available under CC-BY-SA unless otherwise noted.