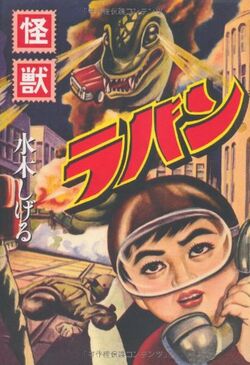 The manga was written by Shigeru Mizuki and released in 1958. It was also re-released in 2009 in hardback form.

Two rival Japanese scientists named Ichiro Mizuki and Jiro Ikawa both travel to Papua New Guinea to harvest Godzilla's blood in an attempt to achieve immortality. However, before Jiro leaves his sister tries to give him a good-luck charm but believes such things are mere superstition. So, Ichiro takes it instead. Once the scientists arrive at their destination they search for Godzilla, eventually finding him at the foot of Porogon Mountain. They manage to successfully extract a sample of the monster's blood with a large needle. Shortly thereafter the men run into a tribe of local natives who end up attacking them and ultimately wounding Ichiro with a poison spear. Jiro steals the vial of blood from Ichiro and leaves him to die while he is incapacitated, however Ichiro doesn't realize this. Ichiro manages to crawl his way to the boat reuniting with Jiro, much to his shock and horror. As they set sail once more for Japan, Jiro concocts a plan to get rid of Ichiro once and for all. He tricks Ichiro into allowing him to inject some of Godzilla's blood into his body, saying it is a drug to counteract the poison. Jiro, mistakenly thinking the raw blood would kill Ichiro is horrified to see Ichiro begin mutating into a reptilian creature that then jumps into the ocean. Jiro returns to Japan and is hailed as a hero for successfully acquiring the blood. Soon however, Japan is attacked by a giant monster similar to Godzilla that is given the name Raban. Responding to the attacks, the military tries eliminating the newfound threat with standard weaponry to no avail. Desperate to get rid of Raban, Japan puts its only hope into their hero Jiro who devises a plan to create a mechanical counterpart who he will pilot into battle and use to destroy the threat. Secretly, Jiro knows Raban is the fully mutated Ichiro, but does not tell anyone of this knowledge. This secret is made harder to cover up however due to the fact that Raban is still wearing Keiko's good-luck charm, which Keiko later realizes. Suspicious that the monster may really be Ichiro, Keiko seeks out Ichiro's mother and in the process discovers that Ichiro is really Jiro's long lost brother having been separated in World War II and presumed dead. Just as Jiro completes the mechanical Raban and prepares to defeat Raban, Keiko explains everything and leaves Jiro unable to kill his own brother albeit mutated. Jiro desperately searches for a way to cure his brother eventually turning to the Japanese prime minister for money and extracting the Godzilla blood out of Ichiro, returning him to normal.

Retrieved from "https://godzilla.fandom.com/wiki/Kaiju_Raban?oldid=250735"
Community content is available under CC-BY-SA unless otherwise noted.