King Caesar's Japanese name, "Kingu Shīsā," is a reference to the shisa, the Okinawan mythological creature on which the kaiju is based.

Toho's initial English name for the character was "King Seeser," as seen in early promotional materials for Godzilla vs. Mechagodzilla. The current name, "King Caesar," has been in use since the 1990s.[3]

King Caesar, the ancient guardian of the Azumi family, was sleeping in a mountain, waiting to be awoken. The Black Hole Planet 3 Aliens heard of this monster, and sent their own to destroy it. As MechaGodzilla raced to destroy him, the ancient song was sung. King Caesar erupted from the mountain and took on MechaGodzilla. King Caesar fought the best he could, but he was overwhelmed by MechaGodzilla's power. Godzilla arrived to stop the robot, but soon both were nearly defeated. Godzilla used his special power he had obtained from lightning to pull MechaGodzilla into him, and it allowed him to rip off his head. King Caesar then returned to his cave and collapsing the entrance, burying him to peacefully sleep and heal his wounds.

King Caesar was first seen attacking Okinawa, until he was teleported away by the Xiliens. Once the trust between the aliens and humans was broken, King Caesar was released once again. Alongside Rodan and Anguirus, King Caesar was one of the final monsters controlled by the Xiliens to confront Godzilla as he neared Tokyo. Transported to the Japanese countryside with his allies by the Xilien UFOs α, ß and γ, King Caesar proved to be an agile and intelligent opponent. He was eventually thrown by Godzilla into his two allies, leaving them all unconscious. His fate was ultimately left unknown. 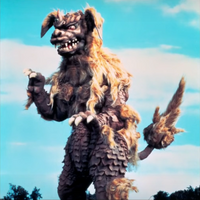 It appeared as a guest monster tie-in for Expo '75 in Okinawa. King Caesar is modeled after the traditional Okinawan "Shisa," a lion-dog statuette used to ward off evil spirits.

King Caesar appeared at the end of the fourth issue of Godzilla: Oblivion, as he emerged from an interdimensional portal along with Mothra, Rodan, Anguirus, Biollante and Zilla while Godzilla was battling Mecha-King Ghidorah (Hedorah joined them in the next issue). While he did join the fight with the other monsters, at first, he was then seen sitting on a throne made out of flaming buildings. Later, after Mecha-King Ghidorah was defeated by Godzilla, all of the monsters were left behind as the humans left the Earth as it became covered by tiny robotic cells that served as interdimensional doorways.

Retrieved from "https://godzilla.fandom.com/wiki/King_Caesar?oldid=282911"
Community content is available under CC-BY-SA unless otherwise noted.