King Caesar, the ancient gaurdian of the Azumi family, was sleeping in a mountain, waiting to be awoken. The Black Hole Planet 3 Aliens heard of this monster, and sent their own to destroy it. As MechaGodzilla raced to destroy him, the ancient song was sung. King Caesar erupted from the mountain and took on MechaGodzilla. King Caesar fought the best he could, but he was overwhelmed by MechaGodzilla's power. Godzilla arrived to stop the robot, but soon both were nearly defeated. Godzilla used his special power he had obtained from lightning to pull MechaGodzilla into him, and it allowed him to rip off his head. King Caesar then returned to his cave to heal his wounds. 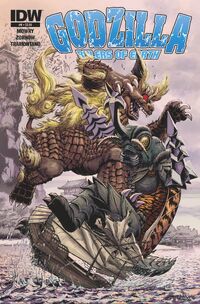 King Caesar 1974 Roars
Add an image to this gallery

Retrieved from "https://godzilla.fandom.com/wiki/King_Caesar?oldid=110053"
Community content is available under CC-BY-SA unless otherwise noted.