King Caesar (キングシーサー, 'Kingu Shisa') is a bipedal kaiju from the Toho produced Godzilla series. Caesar's appearance was inspired by the Shisa, a beast that looks like a combination between a lion and a dog. The shisa is prevalent in Okinawa mythology and is of Chinese origin. Its first appearance was in 1974's Godzilla vs. Mechagodzilla. He is also in the game 'Godzilla: Unleashed.'

King Caesar possesses formidable speed, strength and agility, enabling him to use various martial arts techniques, making him a formidable foe in close combat. He is rock-solid, able to withstand a horrible beating before going down. It is possible that King Caesar is a golem-like monster, as his body seems to be made of rock with gems for his eyes and on his forehead. His most notable ability, however, is his ability to draw the energy beams of enemy Kaiju into his eyes, and fire it back at the target. He used this twice with great effectiveness against Mechagodzilla before the cyborg wisely changed tactics and used his missiles instead. However, this special ability of his is not shown in Godzilla: Final Wars for no energy weapons were used against him. In videogames such as Godzilla: Unleashed, the Okinawan deity kaiju has to ability to transform raw solar energy into searing beams of heat from his eyes.

In the Showa series, King Caesar was the guardian of the Azumi family. He could be awakened by fulfilling a prophecy and an ancient song. The Black Hole Aliens knew about King Caesar and that it would awaken to prevent them from attempting world domination. When their MechaGodzilla was repaired after being damaged, the aliens sent the mech to conquer the Earth once more. King Caesar was awakened and he confronted the robot. At the beginning, King Caesar was able to successfully fight back by absorbing the mech's eye lasers through his own eyes and then reflecting the projectiles back at his adversary. However, MechaGodzilla was too strong even for the guardian and almost killed Caesar. However, Godzilla arrived to aid King Caesar. Still, MechaGodzilla was more powerful than both of them and horribly outmatched the duo. Godzilla gained a magnetic attraction ability during the fight and used it to pull the robot towards him. Godzilla held his robotic doppelganger in place, allowing Caesar to ram the mech repeatedly. Godzilla finished off the machine by ripping off its head, and fell into the sea when Mechagodzilla's body exploded. King Caesar then returned to the rock formation from where it came.

In the Millennium series, Caesar was one of the many controlled monsters of a race of alien beings known as Xilians. He appears in Okinawa (in a twist of irony, as he was its protector in the Showa series), an island part of the Kyushu archipelago in Japan. King Caesar stomps through a factory, crushing everything in his path. Suddenly, an enormous flying object arrives on the scene and removes the giant creature. The same thing happens to all the other monsters that were attacking the cities throughout the world. The Xilians come and tell Earth that they saw that the planet was under attack and destroyed the towering titans to save Earth and that a meteor is falling to Earth, threatening all life. However, it is discovered that the Xilians were controlling the kaiju and that Gorath does not exist. The Xilians then release the kaiju to finish destroying the cities. However, Gotengo freed Godzilla and lured him to the places where the controlled kaiju were so he could fight them. King Caesar, Anguirus, and Rodan are teamed up and released on Fuji to defeat Godzilla. Godzilla successfully defeated them and they were thrown on top of each other in a pile. Instead of being killed, Godzilla let them live and moved on to Tokyo. Caesar, along with Anguirus and Rodan is one of the three enemy Kaiju in Final Wars which Godzilla did not kill, in an homage to the Showa series, when all three monsters were his allies.

"King Caesar is a mystical defender of the Earth. Unlike the other Earth Defenders, King Caesar is specifically concerned with the well-being of humanity, and will respond to events that threaten human beings. King Caesar's strongest asset are his powerful legs, which have tremendous strength and flexibilty. King Caesar's entire body is a capacitor, storing and refocusing the sun's energy into searing beams of heat, which he projects from his eyes. In battle, King Caesar can take the energy from his opponent's weapons, which both protects him from ranged attacks and provides him the power necessary to engage fast-moving opponenets at range. His internal batteries are not unlimited in their capacity, and there is a possibility of overload should King Caesar absorb too much energy without quickly discharging it."

King Caesar and Anguirus were said to have been originally considered for inclusion in Godzilla 2000, although it does not appear that the idea got past the planning stage. Also it is unknown whether or not Anguirus and King Caesar were going to somehow fit into the script for Godzilla Millennium (1999), or if they were going to fit into a completely different story.

Since time before time, KING CAESAR (a crude romanization of his true name, "King Shisa") has sat ever-watchful, ever vigilant to protect the tiny island of Okinawa from impending threats. Of course, an ancient ritual must be enacted, and he must only be awoken "when the red moon sets, and the sun rises in the west." The Simeons were wise to an apparent attempt to ressurect the ancient guardian, but they scarcely believed in such primitive beliefs. Nevertheless, another monster would be a decided thorn in their side, so they attached a small group with limited resources to prevent the statue's arrival in Okinawa from mainland Japan. Of course, the statue made it (through INTERPOL's interference) and the mighty Shisa was brought back to life to battle alongside Godzilla against MechaGodzilla, and again later against Titanosaurus. Little is known of King Caesar's biology, except that the creature is supposedly made largely of mineral constructs. In short, it is a living statue. Caesar himself seems a very wise and noble kaiju, and, interestingly, he is the only monster that Godzilla will seemingly look up to and even respect. There had even been scattered eye-witness accounts of Caesar "training" Godzilla, teaching the giant saurian in such a way that an elderly martial artist would teach a younger pupil, before the final battle against the Simeon forces.

NOTE - The recently uncovered scrolls deep within Seatopian vaults (after Antonio's overthrow) has revealed some startling facts: it may very well be a human spirit that inhabits the body of the mighty Shisa! Details are still sketchy, but it very well may have something to do with the battle between the stone god and his allies MANDA and MOTHRA against the legendary AXOR and his mind-controlled forces. 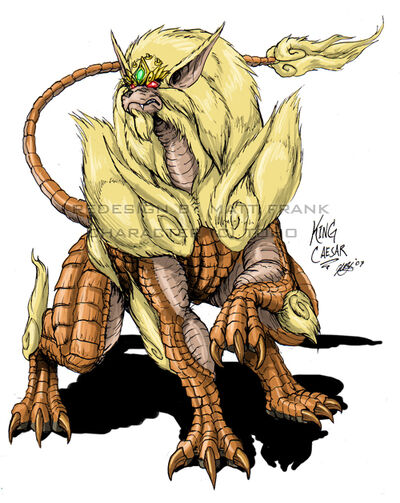 Retrieved from "https://godzilla.fandom.com/wiki/King_Caesar?oldid=27011"
Community content is available under CC-BY-SA unless otherwise noted.