King Ghidorah was brought to life on the movie screen by a stunt actor inside an elaborate three-piece suit, with a team of puppeteers to control the suit's many appendages allowing realistic movement. His design was mostly created by Eiji Tsuburaya based on a minimal description in the script: "It has three heads, two tails, and a voice like a bell."

King Ghidorah does not have much of a developed personality because he is under someone's control in most of his appearances. Whenever he isn't, he became confused due to no longer receiving commands from his masters and was overwhelmed by Godzilla and other opponents, eventually trying to retreat.

It seems that each of King Ghidorah's heads can think for themselves separately, although the middle head appears to be dominant which could easily be a cause of not being coordinated.

In Godzilla vs. King Ghidorah, King Ghidorah is part of a scheme by time-traveling terrorists known as the Futurians to destroy Japan in the past to prevent it from becoming a global economic superpower. He is the result of the Futurians placing three genetically-engineered creatures from the future called Dorats on Lagos Island in the year 1944.

In 1954, the Dorats were exposed to the Castle Bravo hydrogen bomb test conducted at nearby Bikini Atoll, which caused them to merge and mutate into King Ghidorah. According to the novelization of the film, the Dorats were engineered using DNA recovered from the corpse of another King Ghidorah found on the surface of Venus, suggesting that like in the Showa series King Ghidorah is originally an alien creature, but the one created by the Futurians is simply a clone of him and not the original.

Planning to destroy Japan in the past and prevent it from becoming a corrupt economic superpower by the 23rd century, a group of time-traveling terrorists known as the Futurians traveled to 1992 Japan and claimed that Godzilla would return to destroy Japan in the near future, rendering the nation uninhabitable in the future. The Futurians assembled a team of Japanese citizens and traveled to Lagos Island in 1944, where it was believed a Godzillasaurus would later be exposed to the Castle Bravo H-bomb test conducted at nearby Bikini Atoll in 1954 and transform into Godzilla. The Futurians teleported the Godzillasaurus to the Bering Sea, where they believed it would die, and in its place secretly left behind three genetically-engineered creatures called Dorats. In 1954, the Dorats were exposed to the H-bomb test and merged together into King Ghidorah, who was taken control of by the Futurians in 1992 and unleashed against Japan.

King Ghidorah first attacked Fukuoka, tearing the metropolis apart with his gravity beams. The Futurians demanded that the Japanese government surrender to them and follow their demands for rebuilding the country. The government, unwilling to comply, sent a nuclear submarine owned by a private corporation to the Bering Sea, believing the Godzillasaurus was still dormant there and could be transformed into a new Godzilla by the sub's torpedos. Instead, the sub was intercepted en route by Godzilla, who was never actually erased from the timeline in the first place. Godzilla fed on the submarine's radiation, curing his Anti-Nuclear Energy Bacteria infection and causing him to grow to 100 meters in height. Godzilla came ashore in Hokkaido, much to the Futurians' irritation. The Futurians sent King Ghidorah to kill Godzilla, and the two titans battled near Hokkaido. King Ghidorah seemed to have the upper hand, until Emmy Kano and her android M11, defectors from the Futurians, assaulted their comrades' ship MOTHER and destroyed the computer controlling King Ghidorah. King Ghidorah was stunned, allowing Godzilla to knock him to the ground and sever his central head with his spiral breath. Emmy used MOTHER's subship KIDS to teleport MOTHER in front of Godzilla, who promptly destroyed it with his atomic breath. King Ghidorah tried to fly away, but Godzilla blasted out his wings with his atomic breath and caused him to fall into the North Sea. The empowered Godzilla began a new rampage across Japan, leaving the nation helpless. Emmy believed that King Ghidorah could be revived with technology from her time so long as his corpse was preserved by the cold water, and traveled back to 2204 in KIDS.

In Godzilla vs. King Ghidorah, King Ghidorah constricted his necks around Godzilla in an attempt to strangle him, causing him to foam at the mouth.

King Ghidorah is usually portrayed as being extremely durable and resistant to damage, often to an extent close to Godzilla. He withstands conventional weaponry with no noticeable effect, and can even shrug off point-blank blasts from Godzilla's atomic breath. In Godzilla vs. King Ghidorah, he survives having his middle head decapitated and his wings shredded, and remains alive but comatose for over 200 years laying on the sea floor.

King Ghidorah tends to use his durability to his advantage, as he often prefers to escape from a battle that he can't win before he suffers more injuries than necessary.

King Ghidorah is able to fly up to speeds of mach 3 in the Earth's atmosphere. He exceeds this speed while flying through space.

King Ghidorah's most famous ability is the golden lightning bolt-like gravity beams he spits from his three mouths. These beams are roughly equal in power to Godzilla's atomic breath, and are capable of causing large-scale explosions when fired at buildings. Individually, these beams can cause serious damage, but combined into a single beam when fired together, they can cause devastating attacks to other monsters.

King Ghidorah can produce hurricane-force winds by flapping his wings, which are capable of blowing away buildings and knocking other kaiju off their feet.

Like the Showa King Ghidorah, the Heisei King Ghidorah will become dazed and confused if the mind control over him is severed. This is shown when the computer the Futurians use to control him is destroyed, leaving King Ghidorah confused and vulnerable, which allowed Godzilla to gain the upper hand.

The Heisei Ghidorah appeared within this game as an image for a slot icon with his other designs being based off of his Millennium incarnation.

King Ghidorah appeared within the game Godzilla: Destroy All Monsters Melee. He made an solid choice for beginners due to his evenly-balanced battle stats, and like many others, had his own abilities.

King Ghidorah appeared within the game Godzilla: Save the Earth as a playable character.

The Heisei Ghidorah appeared in part within the Wii version of Godzilla: Unleashed, as his design within the game is a hybrid of his Heisei and Millennium designs.

King Ghidorah appeared within the game Godzilla On Monster Island utilizing his Heisei design, albeit being slightly taller than the design he was based off of. In this game however, he also utilizes the Showa era Ghidorah's roar.

The Heisei King Ghidorah made another appearance within the game Godzilla: Kaiju Collection, as the only Ghidorah available.

The natural form of King Ghidorah appears as a unit in Godzilla Battle Line. In the game, he is a glass cannon flying unit that causes a high amount of spread damage. 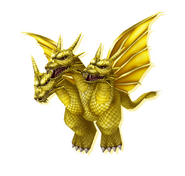