Krystalak (クリスタラク,   Kurisutaraku?) is a crystalline kaiju created by Atari, Pipeworks and Toho that first appeared in the Wii version of the 2007 Godzilla video game, Godzilla: Unleashed.

Krystalak's name comes from the word crystal, and may be derived from the Czech krystalizovat, which means to crystallize.

Although Krystalak's posture is reminiscent of a cat, his overall appearance is of a reptile, and is most likely based on a primitive therapsid (mammal-like reptile). He also has a purple crystals acting as hair in his chin, which makes it look like a beard, his head, and his back, as well as having them as claws, on his underside and belly, and on the tip of his tail, having white skin wherever the crystals are not present.

Krystalak is born from the crystals that crashed onto Earth, therefore producing crystal based powers. He can fire crystal shards from his tail, has incredible agility, and attacks with incredible ferocity. He fires a powerful Prism Beam from his mouth, but his most devastating attack is the ability to overload his heart and cause a huge shock-wave that blasts everything around him ("Crystal Overload"), dealing incredible damage.

"Krystalak is a semi-sentient crystal organism, spawned by the same meteor shower that threatens to rip the earth apart. Born from the crystals, Krystalak seeks to bring all of their energies together to make himself into the ultimate monster. Like the crystals that spawned him, Krystalak is quite resistant to most forms of energy weapons, forcing opponents to fight him tooth and claw. Krystalak can expel crystal shards in a solid stream, bludgeoning foes from a distance. Krystalak can also overload his crystal heart - sacrificing his own physical integrity to damage everything nearby. With no ties to any existing alien or terrestrial powers, Krystalak seeks power at any cost." 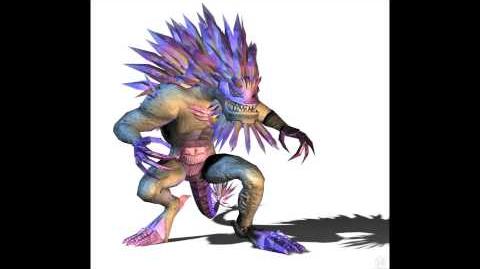