M.O.G.U.E.R.A. (ＭＯＧＥＲＡ,   Mogera?) is a U.N.-built mecha created by Toho that first appeared in the 1994 Godzilla film, Godzilla vs. SpaceGodzilla.

M.O.G.U.E.R.A. shares the same silhouette as its Showa era counterpart, but with the cybernetic elements of Mechagodzilla. Notably, it has a smoother finish, with a defined torso and a wider abdomen reminiscient of a tasset or faulds over its legs. Its chrome plating has silver accents and metallic belt tracks on its shoulders, legs, and neck. The chest features a satellite cannon disc. M.O.G.U.E.R.A.'s forelimbs are cone-shaped, but can open up to reveal weaponry. Its head retains the drill bit, albeit a bit smaller, with visor-like glowing yellow eyes and a single crest on top.

M.O.G.U.E.R.A. was a unique case in Toho's kaiju library, as it did not have any actual roars, but it did, however, have sounds for its engines and beam attacks. To make up for this fact, in Godzilla: Save the Earth and Godzilla: Unleashed, M.O.G.U.E.R.A. was given a voice and it could repeat its own name.

Additionally, in Godzilla Trading Battle, M.O.G.U.E.R.A. and Moguera were both given the same brief robotic footstep sound. 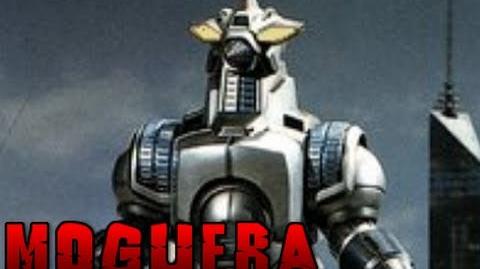 M.O.G.U.E.R.A. was constructed from the left over pieces of Mechagodzilla in another attempt to kill Godzilla. It could split up into two different vehicles: Land Moguera and Star Falcon. It was first sent to fight SpaceGodzilla when he was detected flying toward Earth. M.O.G.U.E.R.A was sent flying out of control into space by SpaceGodzilla, but it managed to make it back to Earth. It was sent out again after repairs to engage SpaceGodzilla in Fukuoka, but pilot Akira Yuki, who held a grudge against Godzilla, redirected the mech and attacked Godzilla instead. The other pilots, Koji Shinjo and Kiyoshi Sato, knocked Yuki out and flew to Fukuoka. M.O.G.U.E.R.A. battled SpaceGodzilla alone until Godzilla arrived and joined the battle.

M.O.G.U.E.R.A. has an expansive arsenal of weapons, essentially making it a mobile weapons platform. M.O.G.U.E.R.A. is in fact, the mechanical kaiju who is most dependent on ranged weapons, along with a drill as a means of offense.

In the video game Godzilla: Unleashed, the mole-based machine can launch an EMP bomb that instantly detonates and leaves a blast radius for a short duration; and in the game's predecessor can create a Photonic Storm, in which a huge ring of orange-and-blue-colored energy blasts out of M.O.G.U.E.R.A., hitting everything around it.

M.O.G.U.E.R.A. can fire an Automatic Tracking Laser Cannon (自動追尾式レーザー砲 Jidō Tsuibishiki Rēzāhō) from each of its cone-shaped hands, in the form of blue energy beams. This laser possesses high penetrating power and can track targets, allowing M.O.G.U.E.R.A. to easily target and strike a moving enemy with the laser by moving its arms. M.O.G.U.E.R.A. used this laser in its first battle with SpaceGodzilla in the asteroid belt, as he flew around M.O.G.U.E.R.A., but the cannon was able to lock onto the target regardless and land direct hits. The Automatic Tracking Laser Cannon also serves as Land Moguera's primary weapon.

It can fly through earth's atmosphere at Mach 1 and through space at Mach 44. It is also capable of moving on land via independent leg action, or with the treads built into its feet and legs. These treads make M.O.G.U.E.R.A. faster than the average kaiju, and he can easily attack while moving at such fast speeds. M.O.G.U.E.R.A. is also the combined form of two vehicles: Land Moguera, a tracked armored fighting vehicle able to drill through the earth; and the Star Falcon, a VTOL craft capable of space flight. M.O.G.U.E.R.A. split apart into the two vehicles during the final battle against SpaceGodzilla in order to help Godzilla destroy the space monster's power source in the Fukuoka Tower. Star Falcon distracted SpaceGodzilla while Land Moguera destroyed the tower's foundation.

M.O.G.U.E.R.A. possesses a Plasma Laser Cannon (プラズマレーザーキャノン Purazuma Rēzā Kyanon) in each of its eyes. The laser takes the form of a rapid stream of yellow energy blasts, which are said to be three times as powerful as Mechagodzilla's Laser Cannons. Because the Plasma Laser Cannon fires a repeating series of individual laser blasts, the weapon can be cooled and recharged repeatedly as it fires, preventing it from overheating and allowing M.O.G.U.E.R.A. to continuously use the attack.

M.O.G.U.E.R.A.'s most powerful weapon is the Plasma Maser Cannon (プラズマメーサーキャノン Purazuma Mēsā Kyanon), a powerful energy weapon secretly concealed in it's chest, and can be fired more quickly than Mechagodzilla's Plasma Grenade.

M.O.G.U.E.R.A. can fire its Plasma Laser Cannons and Plasma Maser Cannon at the same time in an attack called All Weapon (オールウェポン Ōru Uepon). The combined power of both weapons was capable of knocking Godzilla off his feet and temporarily knocking him out. This however, was inadvertently by accident as M.O.G.U.E.R.A. was in fact, actually targeting SpaceGodzilla while Godzilla was battling him at close quarters, which as a result, caused Godzilla to also get caught in the line of fire.

Land Moguera is equipped with a Surface-to-Air Laser Cannon mounted on its top antenna, though M.O.G.U.E.R.A. never utilized it in its combined state.

Star Falcon is fitted with two "Maser Vulcan Cannons" on either side of its cockpit. These however, are not utilized by M.O.G.U.E.R.A.

In the Atari/Pipeworks trilogy of Godzilla video games, M.O.G.U.E.R.A. could also emit sparks from its chest to disorient opponents.

M.O.G.U.E.R.A. appears in Godzilla: Save the Earth as M.O.G.U.E.R.A. 2, as well as in Godzilla: Unleashed and Godzilla Unleashed: Double Smash, however, it is unplayable in the latter. Its special attack stat (projectiles and beams) and speed are significantly higher than most other monsters, but its physical offense and defense are very low.

To be effective in a fight, M.O.G.U.E.R.A. must attack from a distance while dodging and retreating, making him a hit-and-run fighter. When it runs out of energy, M.O.G.U.E.R.A. can temporarily shut down his power and recharge, though this makes it vulnerable as it temporarily cannot move.

MOGUERA 2 in Godzilla: Save the Earth

M.O.G.U.E.R.A. made an appearance in the mobile title Godzilla: Kaiju Collection.

In this manga adaptation of Godzilla vs. SpaceGodzilla by Shogakukan, M.O.G.U.E.R.A. has mostly the same role as in the film, but its fate and combat strategies are different.

M.O.G.U.E.R.A. is stolen by Akira Yuki, the main human protagonist, and is taken to Birth Island to use Little Godzilla to draw out Godzilla so he can kill him. G-Force sends the rebuilt Mechagodzilla to battle M.O.G.U.E.R.A., but it is destroyed by the newer mech.

However, M.O.G.U.E.R.A. and its pilot are knocked down by SpaceGodzilla after the cosmic kaiju attacks Birth Island. In addition, M.O.G.U.E.R.A. also suffers very little damage during the final battle with SpaceGodzilla, and is eventually taken back by the U.N.G.C.C.. However, Godzilla disarms the machine by breaking its weapon systems before he departs, wary that the humans could try to harm him and his son again.

In this manga (which is a sequel to the Godzilla vs. SpaceGodzilla manga), two new M.O.G.U.E.R.A. units, M.O.G.U.E.R.A. 2 and 3, are introduced due to their predecessor having been phased out.

M.O.G.U.E.R.A. 3 is darker than M.O.G.U.E.R.A. 2, and has heavier armour plating. The two units are deployed by the U.N.G.C.C. in an attempt to stave off Godzilla's impending meltdown [2], but are both damaged beyond repair due to the massive increase in power Godzilla had received as his meltdown began.

M.O.G.U.E.R.A. made its first IDW appearance in Godzilla: Rulers of Earth #6, where it was sent to fight Gigan and Godzilla, who were battling in Las Vegas, Nevada.

When it arrived, it briefly fought Gigan and was soon caught by the massive hands of Orga, who pulled M.O.G.U.E.R.A. in half. M.O.G.U.E.R.A. was able to transform into Star Falcon and Land Moguera and assisted in fighting the two alien kaiju until Jet Jaguar arrived and destroyed Orga temporarily.

M.O.G.U.E.R.A later took part in the large brawl against the Trilopods alongside Kiryu and Godzilla. M.O.G.U.E.R.A. rammed itself into the frozen Baragon-Trilopod after it was hit by Kiryu's Absolute Zero, but was later torn apart by the Kumonga-Trilopod and Titanosaurus-Trilopod.

Strangely, M.O.G.U.E.R.A. is later seen battling Magita despite having been destroyed beforehand, and is not seen afterwards. This may just be a mistake on the part of the artist, or an act of retroactive continuity which was implemented too late to affect the earlier pages of the final issue.

M.O.G.U.E.R.A. was present in Rio de Janeiro at some point during the battle between Godzilla and SpaceGodzilla in issue #3, but was defeated. M.O.G.U.E.R.A. can be seen wedged in a pile of broken buildings, with the left side of its head and left shoulder on fire. Nearby, the remains of what appears to be Kiryu's arm can be seen, indicating that both mechas were sent to take part in the battle but destroyed.