Maia Simmons is a major antagonist in the 2021 film Godzilla vs. Kong. She is an executive at Apex Cybernetics and the daughter of the CEO Walter Simmons.

Throughout the movie Maia shows herself to be a very prideful and self-centered person, completely devoted to her company. When telling the capabilities of the Hollow Earth Aerial Vehicles, she remarked that Nathan should be more impressed with Apex Cybernetics's accomplishments with it and becomes quite snippy when he referred to it as a helicopter. She also showed she cared very little about anyone else involved in the mission being more concerned with getting the job done. About the only person she seemed to care about besides herself was her father whom she seemed to respect if nothing else. Arrogant to the point of stupidity, she dismissed the strength of King Kong, only realizing too late her mistake in angering an Alpha Titan.

Maia was very dismissive of Nathan Lind seeing herself as his babysitter and being more concerned with his doing his job than his actual welfare. She also cared very little about the other members of the expedition as she nearly ordered her men to shoot the team when they objected to her taking a sample of the Hollow Earth energy source. Besides her own well-being, the only person she seemed to care about was her father as she pridefully claimed that her father gets what he wants. She was very demeaning of Kong seeing him as nothing more than just a big monkey, and an annoying but necessary nuisance she'd have to put up with for the sake of the mission. She showed surprise at Kong's ability to understand and use sign language but even this display of intelligence by the beast was not enough to stop her from suggesting simply dumping Kong overboard to save themselves from Godzilla when he attacked the convoy. Later after retrieving the sample of the energy source she tried to force Kong to move out of the path of her vehicle by having her pilot fire on Kong which ultimately lead to her death as an enraged Kong immediately grabbed her transport and crushed it in his hand.

Maia was sent by her father to deliver the H.E.A.V. transports to the expedition and to watch over the venture and ensure its success. After retrieving the necessary information regarding the energy signature of the Hollow Earth's power source she tried to abandon the rest of the expedition and escape to the surface but made the mistake of ordering her pilot to fire on Kong to make him move out of the way causing Kong to grab the H.E.A.V. when it tried to go through the Hollow Earth tunnel that Godzilla drilled through with his atomic breath. After peeking inside the vehicle to make sure that Jia wasn't inside, Kong casually crushed the H.EA.V. and caused it to explode, killing Maia and everyone else inside of the vehicle. 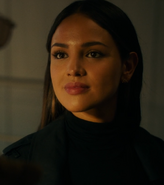 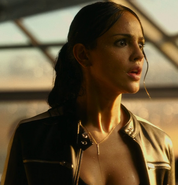 This is a list of references for Maia Simmons. These citations are used to identify the reliable sources on which this article is based. These references appear inside articles in the form of superscript numbers, which look like this: [1]