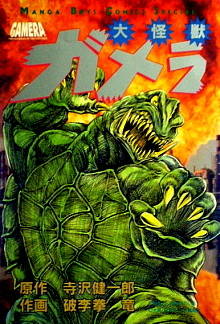 The novel was written by Kenichiro Terasawa and was illustrated by Hurricane Ryu Hariken. It was released on February of 1995.

Photo of the cover
Add an image to this gallery

Retrieved from "https://godzilla.fandom.com/wiki/Manga_Boys_Special_Edition:_Gamera?oldid=235599"
Community content is available under CC-BY-SA unless otherwise noted.