The Heisei Mechagodzilla was originally conceptualized as an out-of-control mechanical monstrosity called "Berserk," which was built by the J.S.D.F. and later infected by a computer virus that made it become self-aware. When this idea was discarded, Mechagodzilla was envisioned as being able to split apart into multiple vehicles. Through rewrites to the script of Godzilla vs. Mechagodzilla II, this ability was toned down into Mechagodzilla combining with Garuda to form Super Mechagodzilla.

Mechagodzilla's sound is basically a higher-pitched Godzilla roar. Mechagodzilla's audio is made from the roars of the original Godzilla, which were also multi-toned and distorted in order to sound more metallic.

Past its shrill cry, its roar can also sound deep, and rumbling, much akin to a jet engine.

Mechagodzilla was created by the United Nations Godzilla Countermeasures Center and controlled by its military branch G-Force, using Futurian technology scavenged from the remains of Mecha-King Ghidorah. In Godzilla Island, this Mechagodzilla was created by G-Guard. In the comic series Godzilla: Kingdom of Monsters, it was constructed as part of a joint operation between the American and Japanese governments to defend humanity from the kaiju appearing around the globe.

In 1992, the United Nations formed the United Nations Godzilla Countermeasures Center, a special branch dedicated to combating the threat posed by Godzilla. The U.N.G.C.C.'s military branch, G-Force, began construction on an anti-Godzilla machine known as Garuda. However, G-Force concluded that the Garuda's combat capabilities were too limited to be effective against Godzilla. Using Futurian technology salvaged from Mecha-King Ghidorah's central head, G-Force began construction of a much more advanced machine built in Godzilla's own image.

The machine, Mechagodzilla, was finally completed in 1994. The mech would first see action when Godzilla appeared in Japan and began heading to the city of Kyoto. Mechagodzilla was launched and engaged Godzilla in the countryside. Mechagodzilla held the upper hand against its organic counterpart, knocking Godzilla to the ground with its impressive array of lasers and missiles. Mechagodzilla fired its shock anchors into Godzilla, electrocuting him and causing him to foam at the mouth. Suddenly, Godzilla emitted a shockwave of energy that caused the electrical current to be reversed and travel back up Mechagodzilla's shock anchor cables. Mechagodzilla began to short-circuit and was rendered immobile as Godzilla rose back to his feet. Godzilla charged at Mechagodzilla, knocking the machine onto its back, before continuing on to Kyoto.

Mechagodzilla was brought back to G-Force headquarters for repairs, which were expected to take several weeks. After being transferred to parking duty after failing to appear to pilot Mechagodzilla, Kazuma Aoki pulled aside Mechagodzilla's lead engineer, Leo Asimov. Kazuma proposed a plan to modify the Garuda and allow it to be more useful against Godzilla in combat. When Asimov asked what they would do with Mechagodzilla, Kazuma revealed a proposal to combine the Garuda and Mechagodzilla into a single, more powerful machine. Asimov agreed, and both mechs were modified. Meanwhile, G-Force was formulating a new plan to kill Godzilla. They had learned that Godzilla possessed a secondary brain in his hip that controlled lower body function due to Baby Godzilla, an infant Godzillasaurus in G-Force's custody, possessing the same structure.

G-Force planned to use Baby Godzilla as bait to lure Godzilla to the Ogasawara Islands, then have Mechagodzilla use its shock anchor cables to destroy Godzilla's second brain and paralyze him, then finally kill him with its arsenal of weapons. Preparations were made, and Baby Godzilla was airlifted to the Ogasawara Islands along with his human surrogate mother, Azusa Gojo. En route, the canister holding them was captured by Fire Rodan, who touched down and tried to break the canister open. 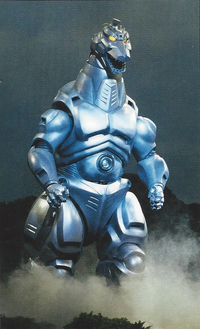 This time, Godzilla's beam overpowered Mechagodzilla's, causing it to fall backward into a building. Godzilla proceeded to fire his spiral beam at Mechagodzilla until the mech's head was blasted off and its entire body erupted in flames. Godzilla roared victoriously and went to find Baby Godzilla. Despite Mechagodzilla's computer claiming that no crew survived its destruction, all of its pilots survived the explosion. Mechagodzilla's pilots looked on from afar as Godzilla and his newly-adopted son waded out to sea together, remarking that life always triumphs over artificial life.

The materials salvaged from Mechagodzilla were later used by the U.N.G.C.C. to construct a new mecha, M.O.G.U.E.R.A., for the purpose of finally destroying Godzilla. When Godzilla destroyed SpaceGodzilla with his red spiral atomic breath, he also completely destroyed the wreckage of M.O.G.U.E.R.A., leaving its components unsalvageable.

In the manga adaptation of the film Godzilla vs. Mechagodzilla II, Mechagodzilla is capable of launching its arms and a device on its forehead. This ability was witnessed in action when Mechagodzilla attempted to attack Godzilla's secondary brain again after the atomic reptile was instilled with Rodan's energy. He also uses this ability as one of his attacks in the GBA video game Godzilla: Domination!.

Mechagodzilla possesses laser cannons in its eyes and a mega-buster ray from its mouth. The mega-buster in particular appears to be as powerful as Godzilla's own atomic ray.

In the GBA video Game Godzilla: Domination!, Mechagodzilla could launch lightining bolts from his waist cavity.

The Heisei Mechagodzilla is protected by an armor plating made from an alloy called NT-1, which is coated in a layer of artificial diamond. The coating allows it to absorb energy from energy weapons such as Godzilla's atomic breath, which is then transferred to its ultimate weapon, the devastating plasma grenade, which is located on its waist. Mechagodzilla was also able to absorb energy from Fire Rodan's uranium heat beam and use it to power the plasma grenade.

Finally, Mechagodzilla can attach to the warship Garuda to form Super Mechagodzilla. Upon doing so it gains Garuda's powerful Maser Cannons as well as the ability to continuously hover above the ground by using Garuda's massive engines to achieve lift. When the Garuda connects to Mechagodzilla, all damage that Mechagodzilla had sustained before connecting is repaired, as seen when its right eye that was destroyed by Rodan earlier in the final battle switched on and started functioning normally.

Mechagodzilla can fire tranquilizer missiles from its hips, paralysis missiles from the shoulders, and shock anchor cables from its wrists, enabling the robot to deliver powerful electrical charges in a struck opponent - this was later modified into a weapon called the "G-Crusher." The G-Crusher, when precisely targeted at Godzilla's secondary brain, was able to completely destroy it with a single discharge, crippling Godzilla from the waist down. Mechagodzilla's armor is nearly invincible, able to take a super-powered Godzilla's spiral breath, which reached a temperature of 1.2 million degrees Celsius, repeatedly before finally going out of commission.

When Mechagodzilla first used its shock anchors against Godzilla, Godzilla was able to somehow reverse the flow of energy back to Mechagodzilla, causing the machine to short-circuit.

Mechagodzilla has one major weakness: hand to hand combat. For all its weapons, Mechagodzilla lacks any real ability to fight up close, losing an eye to Rodan when it managed to get in close and proving no match for Godzilla when he got close enough.

The Heisei Mechagodzilla made an appearance within the Godzilla Arcade game.

Mechagodzilla in the Godzilla arcade game

In the Game Boy Advance video game Godzilla: Domination!, Mechagodzilla has the ability to unleash a flame from its hand in a slow attack with good reach. It also can perform a hydraulic kick, where he unleashes a flame from the jets on its feet for a slow attack with excellent reach. It can also do a claw launch, in which it fires off its fist, which will fly forward and then turn around and return to Mechagodzilla. A devastating attack with the potential to hit twice.

Its other video game abilities include the power to fire an electric bolt from his navel area (similar to the plasma grenade), the ability to launch six heat-seeking missiles from compartments located on its back and the ability to create a cooling steam from its chest plates which will slightly heal Mechagodzilla and injure nearby monsters. In the Japanese version of the game, this Mechagodzilla is replaced by Kiryu, the Millennium Mechagodzilla, although the change is only cosmetic.

Mechagodzilla 2 in Godzilla: Save the Earth

In the PS3 version, Super Mechagodzilla appears as one of the final bosses of the game, initiated when Godzilla enters Area 23 if the G-Generators are not destroyed fast enough. It will attack Godzilla using its shock anchors, beam weapons and melee attacks. It may eventually be joined by the Super X and they will both attack Godzilla.

In the PS4 version, Super Mechagodzilla will appear as the stage 8 boss if the player takes the easy or normal routes.

In this manga adaptation of his debut film by Kodansya Comics, Mechagodzilla appears as the main antagonist. In this adaptation he is noticeably more brutal and more powerful, being able to rip Godzilla's dorsal fins in half with little effort. Mechagodzilla also gains several new abilities, including the ability to fire its arms off on a pair of cables from its shoulders at foes.

In the first fight against Godzilla, Mechagodzilla overpowers him, tearing his dorsal fins and blasting his eyes with shots of his Mega Buster Ray. However, Godzilla manages to behead Mechagodzilla, and retreats. It is then explained that Mechagodzilla's brutal abilities are related to a remnant of Mecha-King Ghidorah's programming being present in the mecha's computers. In the subsequent battle, Mechagodzilla uses the G-Crusher on Godzilla, but this fails after Fire Rodan revives him. Mechagodzilla is then soon defeated.

In this manga by Shogakukan, Mechagodzilla is rebuilt by G-Force and deployed after the manga's main protagonist, Akira Yuki, steals M.O.G.U.E.R.A. from the U.N.G.C.C.. Mechagodzilla enters battle against its successor, but is quickly destroyed.

In Godzilla: Kingdom of Monsters, Mechagodzilla is constructed in Detroit as part of a joint Japanese and American military project to combat the giant monster threat. Mechagodzilla nearly defeats Godzilla, but something goes wrong with its programming and it runs wild, much like Kiryu did in Godzilla Against Mechagodzilla.

Eventually, the massive machine breaks down in the wilderness and is discovered by Steven Woods. Woods takes command of Mechagodzilla and takes it to Washington D.C., where Godzilla is doing battle with King Ghidorah. Mechagodzilla uses its shock anchor cables to shock both monsters into submission, and Woods is praised as a hero for his actions.

In Godzilla: Gangsters and Goliaths, Mechagodzilla is an old robot that has since been replaced by newer models. When Godzilla and several other giant monsters attack Tokyo, Detective Makato Sato convinces his son, who is a member of G-Force, to pilot the outdated Mechagodzilla into battle against Godzilla. Mechagodzilla does not defeat Godzilla, but is able to distract the creature long enough to save innocent lives and buy Sato time to save the Elias and confront Takahashi.

Mechagodzilla is one of the monsters featured in Godzilla: Legends Issue 4. In this issue, a rookie crew piloting Mechagodzilla is sent to China in pursuit of Godzilla. When they arrive, they find the entire area is totally devastated and enveloped in toxic smog. Mechagodzilla is then attacked by the source of the destruction, Hedorah, the smog monster.

Mechagodzilla attempts to attack Hedorah, but all of its attacks seem to be harmlessly absorbed by Hedorah. Suddenly, Godzilla himself arrives and is attacked by Hedorah. Just before Hedorah can seriously harm Godzilla, Mechagodzilla re-enters the battle, forcing the King of the Monsters and his mechanical double to become unlikely allies against the smog monster. After a messy and difficult battle, Godzilla and Mechagodzilla defeat Hedorah and go their separate ways, deciding to resume their conflict another time.

This version of Mechagodzilla does not actually appear in Godzilla: Ongoing, but he is mentioned as the predecessor for the new Mechagodzilla, Kiryu.

Mechagodzilla in Godzilla: The Half-Century War #4

This Mechagodzilla makes a brief cameo as a model on Chavez's desk in issue #1 of Godzilla: Rulers of Earth.