The Mysterians
Moguera (モゲラ,   Mogera?) is a Mysterian mecha created by Toho that first appeared in the 1957 film, The Mysterians.

Moguera's Japanese name, Mogera (モゲラ), is derived from mogura (or モグラ, lit. dirt dragon), the Japanese word for "mole." This is likely because Moguera possesses the ability to dig similar to a mole, and was originally envisioned as a giant quadrupedal animal similar in appearance to a mole in the planning stages of The Mysterians. "Mogera" is also the name of a genus of Asiatic moles. While the Showa Moguera's Japanese name is always spelled in katakana, the Heisei version's often appears in Latin characters as MOGERA or M・O・G・E・R・A.

Moguera is a rotund mecha with cubic proportions. Its main body has a visible split in the middle, with a treaded surface like a caterpillar track belt. It has teal limbs, with its forelimbs ending in long gold pincers, and a circlesaw-shaped spine on its back running down to a metallic tail. Its golden head two large macroscopic lenses for eyes and a set of antennae, and a large drill in front of its head.

The original Moguera did not have an actual roar, although its weapons and attacks did make sounds. 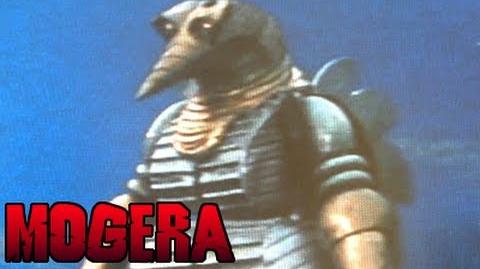 Moguera was a war machine created by the Mysterians. They sent Moguera to attack a village and destroy its shrine. Moguera moved up the river and was attacked by policemen. Moguera then destroyed a power plant, and then attacked a town. It was attacked by the military, but their weapons had no effect. Moguera was defeated when it tried to cross a bridge that was rigged to explode.

After the first Moguera was destroyed, another Moguera named Moguera No. 2 (モゲラ(2号),   Mogera (2-gō)?) was released, and it attacked from underground. It dug up too close to a Markalite Cannon, which collapsed on it, destroying the machine.

Moguera has the ability to burrow.

Moguera can fire beams from its eyes.

Appearing on the first world, the giant mech Moguera will follow Godzilla and Mothra throughout the game, attacking them on each world. Moguera lacks versatility as he is only able to walk across the stage rather slowly, usually in response to the player's movement; in fact, if the player advances on Moguera there is a chance he will back himself into the corner. On top of that, a strange glitch triggers that makes Moguera unable to attack or fight back at all until the player moves backwards.

Moguera can jump, not very well however, but it will still be enough to knock Mothra to the ground if she is too close. While Moguera lacks the maneuverability of Gezora, he makes up for it with fire power as his Eye Beam will deal noticeable damage to either Godzilla or Mothra; furthermore, the beam is incredibly accurate and its very rare that either Godzilla or Mothra will be able to dodge it.

Moguera has two variations on his Eye Beam, one a bright red and the other a brown; which he uses depends on who he is fighting against, bright red against Godzilla and brown against Mothra. The difference in the beams, however, is purely cosmetic.

Moguera in Godzilla: Monster of Monsters