Newly released or upcoming content
Gojipedia doesn't currently possess thorough information on this specimen, character, or event. This article will be updated with new information as it arises, and is subject to change.

Monarch (君主,   Kunshu?, Known when the films were release in Japan as the same) is a major scientific organization created by Legendary Pictures that plays a substantial role in the MonsterVerse.

Monarch was founded in secrecy in 1946[2] as a joint coalition between several governments in order to hunt and study massive unidentified terrestrial organisms (MUTOs). The first such creature Monarch studied was Shinomura, a deadly hive-minded radioactive creature composed of many smaller composite lifeforms.

One of Monarch's operatives, Eiji Serizawa, also was intrigued by eyewitness accounts of a "giant lizard that walked like a man" that seemed to be chasing Shinomura throughout the islands. Serizawa called this creature "Gojira," after Pacific Island legends describing him. In 1954, Monarch cooperated with the United States military to lure Godzilla and Shinomura to Bikini Atoll, where both were thought to be killed by the Castle Bravo nuclear bomb "test". Shinomura was confirmed to be destroyed by the bomb's blast. Godzilla, however, managed to survive.

Decades later, in 1981, Eiji told his son Ishiro about his experiences and belief that Godzilla was still alive somewhere. After Ishiro's father died, he was approached by Shaw, a representative of Monarch and his father's colleague, who offered him the opportunity to join the organization and continue his father's work. Ishiro Serizawa readily agreed and became a member of Monarch.

In 1973, Monarch and Landsat conducted an expedition to an island in the South Pacific called Skull Island, with William Randa, Houston Brooks, and San Lin representing the organization. At this time, the organization was nearly bankrupt.

After returning from Skull Island, Brooks and Lin debriefed survivors, James Conrad and Mason Weaver, before presenting them with a slideshow, showing four ominous cave paintings, with each depicting a giant creature.

In 1999, Ishiro Serizawa and his assistant Vivienne Graham were sent by Monarch to the Philippines to investigate the cave-in of a mine. There, they discovered the skeleton of another member of Godzilla's species that died long ago and two parasitic spores, one of which had hatched.

The creature that hatched from the spore arrived at the nuclear power plant in Janjira, where it attached itself to the reactor to feed. Monarch quickly quarantined the city of Janjira to study the creature, codenamed MUTO. In 2014, the MUTO burst free from its cocoon and destroyed Monarch's facilities and flew away. Serizawa and Graham then assisted the U.S. military in tracking and studying the MUTO and Godzilla once he emerged to hunt it.

Beginning on June 21, 2017, social media pages for Skull Island began to post weekly videos detailing Monarch's timeline of events from the years 1915 to 2016. While certain timeline events have been named, the full descriptions of said events have not been revealed as of yet. 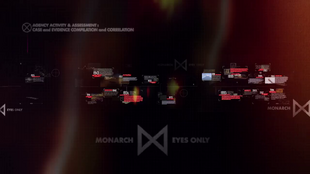 Albert Einstein's general theory of relativity ultimately leads to the splitting of the atom and the dawn of the Atomic Age. This epoch-defining stage in human evolution will act as a beacon that awakens ancient superspecies sustained by nuclear energy.[3]

Haunted by the memory of that day, Randa will go on to become one of Monarch's foremost operatives, searching for the truth behind the ancient creatures that exist beneath the surface of the world.

In the aftermath and cover-up of the U.S.S. Lawton Incident, President Truman unofficially establishes "Monarch Unit", a small, off-book research team established to engage in the systematic study of "massive unidentified terrestrial organisms". Privately, many of Truman's allies question the validity of the group's theories and work to keep their existence a secret.

Baffling meteorologists and defying atmospheric physicists, this unexplained phenomenon saw London's streets overwhelmed by huge clouds of air-polluting smoke. Monarch theorizes that the beating wings of a giant creature could have created an anticyclone that unleashed airborne pollutants across the city.

At the height of the Cold War, aerial photography taken from a Russian spy plane reveals a huge containment facility established around an ice cap in Siberia. The Monarch symbol can be seen emblazoned across the canopy of the structure.

Monarch surreptitiously partners with Landsat and the 1st Aviation Brigade, 3rd Assault Helicopter company to mount an expedition to the mythical "Skull Island" in an uncharted corner of the South Pacific. Encountering the god-like superspecies known as Kong, they soon discover that mankind does not belong here.[4]

A covert Monarch team establishes a quarantine zone around the island's dormant volcano, under the guise of "environmental research". Over the coming years, what began as a small scientific outpost will expand to become a full containment facility around the mouth of the volcano.[5]

Monarch security officer Aaron Brooks defies his father, Houston Brooks, and leads an off-the-books mission to Skull Island, to not only determine what has become of Kong since the 1973 expedition, but also for assurance that Kong is on their side.

Former British Army Colonel and MI-6 agent Alan Jonah is locked up in Pakistani prison after an encounter with Monarch agents. Alan and his band of mercenary accomplices were caught trying to breach the walls of a subterranean M.U.T.O. dig-site.

Mythographic studies of Chinese temples lead Monarch to the high-altitude jungles of the Yunnan province. Dr. Emma Russell and her team follow a mysterious bio-acoustic signature to a previously undiscovered megalithic temple, within which lies a gigantic cocoon. A quickening heartbeat is detected inside.

Days before retirement, Monarch veteran Houston Brooks receives an encrypted recorder bearing a message from his son. His unauthorized mission to Skull Island has resulted in the death of the whole crew (except himself) and revealed dramatic new information about Kong's origins, his role on the island and how Skull Island had evolved since his dad's "visit".

The existence of giant superspecies is revealed to the world as Godzilla clashes with two MUTOs in the center of San Francisco, unleashing devastation upon the urban center. The world watches as Godzilla defends our world and restores balance to the natural order. The time has come for Monarch to step out of the shadows.

When Monarch discovers an extraordinary superspecies sealed beneath the Antarctic ice sheet, Dr. Vivienne Graham leads the effort to build a covert containment and research facility around the dormant creature. Her classified field notes contain a mysterious footnote: "The devil has three heads."[6]

While much of Monarch's paraphernalia is relatively unknown, it is known that Aaron Brooks used a special recorder that featured military-grade bubble memory (which kept the files intact) and password protection.

It is shown to be capable of being plugged into a computer through a cable similar in size to an audio cable (for unlocking the password), and like most military paraphernalia, the recorder also features a serial number related to the owner in question. The audio speaker is located on the back of the recorder, and it appears to feature dual microphones on top. It is also capable of producing a mayday signal.

The password can be selected by the owners as well, in the case of Aaron's, the password is "Gjallarhorn" (due to his father, Houston, reading him Norse mythology as a child, and it became a shared password between father and son).

Monarch also uses Kevlar "float bags" (most notably, Aaron used one to send his recorder out to sea akin to a "message in a bottle"); while the purpose of said bags is not spoken by the workers, writing on the bag shows that the primary purpose is to contain (and aid in the disposal of) extremely hazardous materials.

The back of Aaron's recorder

The front of Aaron's recorder

As stated by Aaron Brooks, Monarch has its field manual. Additionally, as seen in Godzilla, they have hazmat suits and Geiger counters for highly-irradiated environments.

While most of how Monarch carries out their work is unknown, it is known that they prefer a non-lethal approach at best, as Aaron Brooks' recording to his father stated that the "Monarch Field Manual" says "If you must resort to weaponry, in all likelihood, you've already made a mistake." As of King of the Monsters, though, they now have their special forces military group (dubbed "G-Team") for battles involving the Titans.

As revealed in King of the Monsters, Monarch has outposts around the globe that were constructed to study Titans that were located there.

Potential Titan locations shown in King of The Monsters.

A map in the movie showing possible compromised locations seemingly showing both known Titans and some circles that might be Titans Monarch has not found but are searching for or haven't unearthed yet in some cases. There is a point that looks close to Hoboken, New Jersey known as the place where Queen MUTO was hibernating. One of the only confirmations of Titanus Na Kika’s outpost outside the novelization also seem to be shown.

In King of the Monsters, it's revealed that Monarch established bunkers around the world to shelter humanity if Titans should pose a serious threat to the planet.

It is revealed in Godzilla: Awakening that Monarch has possessed a museum with several MUTO exhibitions since 1940.