It is possible that Monster X's name is a reference to "Monster Zero," an alias for King Ghidorah. The "X" in his name could come from the Xiliens' Japanese name, the "X Aliens."

Monster X is a bipedal creature with an exoskeleton-like armored skin. He possesses two small half-skulls on his shoulders and a long black forked tail. Monster X has red eyes, a skeletal face, and long spikes on the top of his head.

Monster X's roar appears to have been adapted from big cat growls and roars. As Keizer Ghidorah, his roar sounds like maniacal cackling, similar to King Ghidorah's characteristic cackling roar. Keizer Ghidorah's wailing cries and growls were possibly adapted from pig squeals, calls from camels, and the cries of baby jaguars.[2][3][4] 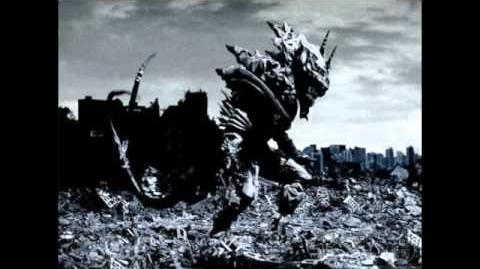 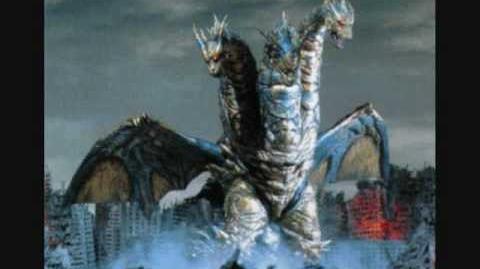 Unlike most of the Xiliens' other mind-controlled monsters, Monster X displays true malice in his battle with Godzilla, fighting viciously and relentlessly. He seems to take pleasure in causing Godzilla pain, such as when he twists Godzilla's wrists and suspends him into the air and when he holds Godzilla still for Gigan to slice him with his chainsaws.

Monster X's maliciousness is further demonstrated when he continues the battle even after Gigan and the Xiliens are defeated and any mind-control the Xiliens had over him is severed. After transforming into Keizer Ghidorah, Monster X blasts and beats Godzilla mercilessly across Tokyo, throwing him around with his gravity beams and kicking the weakened Godzilla in the head.

Monster X was summoned by the Xiliens from the Gorath asteroid, which has unknown origins. Keizer Ghidorah is a form of Monster X. It is unknown if the Xiliens themselves created Monster X or if he was simply discovered by them.

In the comic series Godzilla: Ongoing, Monster X's origins are equally cryptic. According to the Shobijin, Monster X is a creature who is "both of this world, and not of this world." Later comics establish that Monster X is likely of the same species as King Ghidorah, who is established to be a space-faring alien beast in Godzilla: Rulers of Earth.

Monster X was summoned by X through the Gorath asteroid. Godzilla destroyed Gorath with his atomic breath in the skies over Tokyo, annihilating the city. Monster X then floated down behind Godzilla and attacked him. Monster X overpowered Godzilla in hand-to-hand combat until Godzilla retaliated, resulting in a stalemate between the two monsters. Eventually, the modified Gigan arrived to assist Monster X. Monster X held Godzilla still from behind while Gigan sliced his chest with his chainsaw hands.

Mothra arrived and knocked Monster X and Gigan down, freeing Godzilla. Mothra and Gigan then fought and destroyed each other, leaving only Monster X and Godzilla. The monsters resumed their battle, with Godzilla gaining the upper hand and pinning Monster X to the ground, then proceeding to punch him rapidly. Godzilla tried to blast Monster X in the face with his atomic breath, but Monster X pushed his head away, causing the beam to strike the Xilien Mothership instead.

After the Mothership self-destructed and the Xiliens were destroyed, Monster X and Godzilla engaged in a beam-lock, causing both monsters to be blown back. After this, Monster X transformed into Keizer Ghidorah.

Eventually, Keizer Ghidorah approached the fallen Godzilla and kicked him repeatedly in the head before lifting him into the air and draining his energy through his bite. The crew of the Gotengo saw Godzilla losing his energy to Keizer Ghidorah, and Shinichi Ozaki used the ship's Maser Cannon to transfer some of his Keizer energy into Godzilla. Godzilla was immediately re-energized and released a shockwave of energy, breaking him free from Keizer Ghidorah's grip.

Monster X is also the only monster Godzilla fought in Godzilla: Final Wars that survived getting blasted by Godzilla's atomic breath at point-blank in the face, actually appearing to shrug the attack off, as well as the only one able to bring Godzilla to his knees and make him roar out in pain with just one attack.

In the comics, Keizer Ghidorah also has the ability to fly, which is never demonstrated in the film, (likely due to the limitations of the suit).

Similarly, he is also shown to levitate for a short period of time.

Like King Ghidorah, Keizer Ghidorah is able to fire gravity beams from his mouths. These beams are stronger than Godzilla's thermonuclear breath.

Monster X is a formidable match against Godzilla physically, and this coupled with his powerful attacks were able to nearly overwhelm Godzilla.

Keizer Ghidorah in Godzilla: Kaiju Collection
Add an image to this gallery

Monster X appears in the IDW comic Godzilla: Ongoing alongside SpaceGodzilla, Gigan and Hedorah. He first appears in issue 8 where he attacks New York before fighting Mothra. After his fight, he manages to dispatch her before Boxer, Harrison and Asuka Hikari arrive in Kiryu along with Kumonga.

After dispatching Kumonga, Monster X engages in a brief fight with Kiryu before SpaceGodzilla and Godzilla show up. In the battle that follows, Monster X transmogrifies into Keizer Ghidorah where he starts to gain the upper hand over the King of the Monsters.

However, Rodan soon arrives to assist Godzilla, managing to decapitate one of Keizer Ghidorah's heads by creating a sonic boom from his wings. Eventually with Rodan's help, Godzilla is able to overcome and kill Keizer Ghidorah.

Keizer Ghidorah in Godzilla: Ongoing
Add an image to this gallery

Retrieved from "https://godzilla.fandom.com/wiki/Monster_X?oldid=303024"
Community content is available under CC-BY-SA unless otherwise noted.