Queen of the Monsters

Mothra (モスラ,   Mosura?) is a giant divine moth kaiju created by Toho that appeared in the 1992 Godzilla film, Godzilla vs. Mothra. She is among Toho's most popular characters, primarily among female fans, and she has appeared in every Godzilla film era. Toho even honored Mothra with the title "Queen of Monsters" for the soundtrack and home video releases of Rebirth of Mothra, illustrating her proximity in status to Godzilla himself.

The name "Mothra" is the suffixation of "-ra" (a common last syllable in kaiju names) to "moth." Since the Japanese language does not have dental fricatives, it is approximated "Mosura" in Japanese.

Since her first film, Mothra has been depicted in various stages of the lepidopteran life cycle: Mothra's mammoth egg is decoratively colored in blue and yellow waves. The egg hatches into her larva, a massive brown, segmented caterpillar (resembling a silkworm) with glowing blue, sometimes red, eyes. In rare circumstances, twins may emerge from the egg.

The caterpillar eventually spins a silken cocoon around itself (the pupa stage), and from this cocoon the imago (adult) Mothra emerges, a gigantic moth-like creature with brightly-colored wings. Mothra's life cycle—particularly the tendency of an imago's death to coincide with its larvae hatching—echoes that of the Phoenix, resembling resurrection and suggesting divinity.

Despite having wrought destruction worthy of any Toho kaiju, Mothra is almost always portrayed as a kind and benevolent creature, causing destruction only when acting as protector to her worshipers on Infant Island or to her egg, or as collateral damage while protecting Earth from a greater threat. Mothra is usually accompanied by two tiny priestesses or fairies (often called Shobijin—Japanese for "small beauties") who also speak for her.

Mothra's origins have somewhat varied from film to film, but she is always portrayed as a benevolent and ancient creature that possesses some level of divinity.

In Godzilla vs. Mothra, Mothra is once again portrayed as a sort of divine, mystical creature who resides on Infant Island in the company of two miniature telepathic fairies, who in this continuity are referred to as the Cosmos. However, Mothra's origin is gone into in greater depth here than in most incarnations. Godzilla vs. Mothra explains that Mothra was the guardian of the ancient world, protecting all life on Earth from threats. When an ancient civilization created a climate-controlling device, the Earth became offended and created a dark imitation of Mothra, called Battra, to destroy it. After destroying the device, Battra proceeded to eradicate the entire civilization and sought to exterminate all of mankind, believing humans to be a blight on the planet. Mothra challenged Battra and defeated him, sealing him away in the North Sea. Following this battle, Mothra and the Cosmos, the only remnants of the ancient civilization, took up residence on Infant Island, where they lived in peace for the next twelve thousand years.

Twelve thousand years ago, Mothra was the guardian of an ancient civilization. However, this civilization created a climate-controlling device, greatly angering the Earth itself and leading it to create Battra, a dark version of Mothra. Battra destroyed the device, but soon went beyond his purpose and attempted to destroy all of mankind, seeing them as a blight on the Earth. Mothra tried to stop them, and the two moths engaged in a titanic battle that destroyed the ancient civilization. Mothra defeated Battra and sealed him away in the North Sea, while Mothra and the Cosmos relocated to Infant Island to live in solitude. In 1993, an expedition sent to the island by the Japanese government encountered the Cosmos along with Mothra's egg. The Cosmos explained the story of Mothra and Battra to the explorers, and warned that the meteor that recently struck the Earth could awaken Battra. The Cosmos agreed to allow Mothra's egg to be transported to Japan, but en route the barge carrying it was attacked by Godzilla. The egg hatched into a larval Mothra, who attempted to defend herself from Godzilla. Eventually, Battra arrived in his larval form and knocked Mothra aside, attacking Godzilla instead. Godzilla and Battra were eventually swallowed up by a volcanic fault and presumed dead, while Mothra returned to Infant Island and the Cosmos were secretly captured by one of the explorers, Kenji Andoh.

Andoh brought the Cosmos to his employer, the Marutomo Company, who planned to exploit the tiny fairies as a publicity stunt. The Cosmos prayed to Mothra, who left the island to recover the Cosmos. The J.S.D.F. tried to fight Mothra in the ocean as she approached Japan, but failed to halt the larva. Mothra came ashore in Tokyo, unintentionally leaving a trail of destruction as she searched for the Cosmos. Masako Tezuka, her daughter Midori and Miki Saegusa recovered the Cosmos and brought them to Mothra, causing her rampage to cease. Unfortunately, the J.S.D.F. opened fire on Mothra with artillery, wounding her. Mothra crawled to the National Diet Building and encased herself in a cocoon. Meanwhile, Godzilla surfaced from the crater of Mount Fuji while Battra reappeared in the ocean and transformed into his imago form.

As both Godzilla and Battra approached the Tokyo area, Mothra emerged from her cocoon in her imago form and flew off to stop Battra. Mothra and Battra clashed in the skies above Yokohama, with Battra overpowering Mothra and causing her to crash to the ground in the Minato Mirai 21 district. Before Battra could kill his light counterpart, Godzilla appeared and attacked them both. Godzilla proved to be more than a match for either moth, and nearly killed Battra. Mothra saved Battra and temporarily knocked Godzilla down. Mothra communicated with Battra, and they decided to put aside their differences to defeat Godzilla. Mothra and Battra joined forces, firing their various beam attacks in tandem against Godzilla. Godzilla was subdued, and Mothra and Battra grabbed him, carrying him out over the ocean.

Godzilla bit into Battra's throat and fired his atomic breath, killing him and forcing Mothra to drop both monsters into the sea below. Mothra placed a sacred seal over the water and reunited with the Cosmos at Haneda Airport. The Cosmos revealed that Battra told Mothra that a larger meteor was going to strike and destroy the Earth in 1999, and it was his duty to stop it. In the event of Battra's death, Mothra agreed to destroy the meteor instead. Mothra and the Cosmos bid farewell to the humans and flew into outer space, preparing to intercept the meteor before it could reach Earth.

While flying through space to intercept the meteor that was destined to hit Earth in 1999, Mothra became aware of an evil extraterrestrial clone of Godzilla called SpaceGodzilla that was heading to Earth with the intention of killing his Earthling counterpart and conquering the planet.

Mothra sent a Fairy Mothra to Earth, where it revealed itself to Miki Saegusa and transformed into a projection of the Cosmos, who warned Miki of the impending to disaster and stressed the importance of Godzilla in defending the planet. When SpaceGodzilla was ultimately defeated by the combined efforts of Godzilla and G-Force, the projection of the Cosmos reappeared to Miki and congratulated her on saving the planet.

It was also speculated by U.N.G.C.C. scientists that SpaceGodzilla's creation may have been due to Mothra unwittingly carrying some of Godzilla's flesh into outer space following their battle, allowing it to be pulled into a black hole and released through a white hole, where it was exposed to supernovas and mutated into a crystalline lifeform.

The Heisei version of Mothra had some differences. She could now fire a beam of energy so called Ultra-Sonic Beam from her antennae, which can cause large explosions and pierce through buildings; she can also unleash arcs of lightning from her wings, or keep it in her body to release to another through touch.

As an adult, her wings can (and generally do) create gales which tear apart buildings and send other kaiju flying. Her great bulk of a body is commonly used to her advantage in battle to slam into opponents (both in larva and adult form), and her surprising levels of strength can help her to drag and even lift monsters like Godzilla.

Her powder now had a different effect, and now acted as a cloud of mirror-like scales, which would allow beam weapons to repeatedly rebound before striking the target, effectively making them impossible to miss.

Battra easily took advantage of this condition to attack Godzilla by repeatedly firing his Prism Beams, allowing them to strike Godzilla over and over again, with the rebound effect negating any chance of the prism beams not hitting their target. Ironically, Godzilla's Nuclear Pulse wasn't reflected by her mirror and she was thrown back, possibly because her mirror can't reflect energy attacks if it is able to pass around her mirror. In the Heisei era, Mothra is also able to use her scales multiple times without any loss of her ability to fly.

In the Godzilla films of the 1990s, Mothra's priestesses (played by Keiko Imamura and Sayaka Osawa) identify themselves as Earth's Cosmos, who claim to have been created by the very life force of Earth, along with Mothra and Battra. The Cosmos speak not only for Battra and Mothra, but for the living Earth as well. The Cosmos say that Battra was first created by the Earth to balance the ecosystem, which was disrupted by the climate-altering device of an advanced civilization, 12,000 years ago.

However, Battra proved to be a little too enthusiastic about its task, and not only destroyed the things of man, but of the natural order as well. The first Mothra was then created to restore the true balance, and stop Battra's rampage. The Cosmos revere both Mothra and Battra as two different divine forces of nature. They act concerned when Battra is injured, and are pleased when Mothra finds a nonviolent method of stopping Battra, "making friends," as they say in the film. They know when Battra has awoken, and what his tasks and motivations are, but Battra does not appear motivated to seek them out, unlike Mothra, who seems compelled to protect them, and talks to them directly.

Mothra appears in both larva and imago form as a boss in the 2014 Godzilla video game for the PlayStation 3 and 4. Mothra can be randomly encountered by the player in either form. She possesses the powers and appearance of her Heisei incarnation.

The Heisei Mothra made an appearance within the Kaiju Collection game for mobile devices, both as a larva, and as imago.

Mothra appears as an evolving unit and leader in the mobile game Godzilla Battle Line. As a unit, she starts off as a larva, but eventually grows into an adult, draining health extremely quickly. 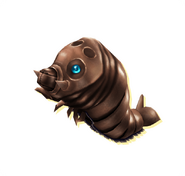 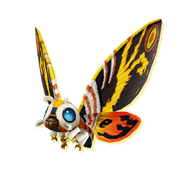 Mothra's name remains the same across many languages employing the Latin alphabet.