Queen of the Monsters

Mothra (モスラ,   Mosura?) is a giant divine moth kaiju created by Toho that first appeared in the 2001 Toho film, Godzilla, Mothra and King Ghidorah: Giant Monsters All-Out Attack, and made subsequent appearances throughout the Millennium era.

The name "Mothra" is the suffixation of "-ra" (a common last syllable in kaiju names) to "moth." Since the Japanese language does not have dental fricatives, it is approximated "Mosura" in Japanese. Originally, Mothra's name was approximated in English as "Mosla," but it was later corrected to "Mothra" by the time of the release of her debut film.

Since her first film, Mothra has been depicted in various stages of the lepidopteran life cycle: Mothra's mammoth egg is decoratively colored in blue and yellow waves. The egg hatches into her larva, a massive brown, segmented caterpillar (resembling a silkworm) with glowing blue, sometimes red, eyes. In rare circumstances, twins may emerge from the egg.

The caterpillar eventually spins a silken cocoon around itself (the pupa stage), and from this cocoon the imago (adult) Mothra emerges, a gigantic moth-like creature with brightly-colored wings. Mothra's life cycle—particularly the tendency of an imago's death to coincide with its larvae hatching—echoes that of the Phoenix, resembling resurrection and suggesting divinity.

In Godzilla, Mothra and King Ghidorah: Giant Monsters All-Out Attack, Mothra is portrayed with purple eyes, although her eyes are normally blue.

The larva has a different shape around the eyes, but like the previous model and its successor, it is remote controlled. This Mothra is very different from the previous and later designs. It looks more like like a hornet and Moth hybrid. The eyes are purple instead of the usual blue, the legs are much longer and the wings are pointier.

On the wings, it has a similar pattern to Mothra Leo from the Rebirth of Mothra trilogy but with purple on the top, yellow in the middle and red on the bottom instead of orange on the top and green on both the middle and bottom or all seven colors of the rainbow like Rainbow Mothra.

TokyoMosuLarva is similar to the Heisei design, only darker in color. The other differences is that the lamps for eyes can glow either red or blue.

While the puppet kept the slim design of the previous SokogekiMosuImago puppet, the Imago state also featured a number of departures from its predecessor, returning to its fluffy and soft look and losing the wasp-like appearance. The trimmed-down approach gave it a more realistic appearance compared to the other fluffy HeiseiMosuImago and ShodaiMosuImago puppets. This puppet is also called the FinalMosuImago (ファイナルモス成虫,   FainaruMosuSeichū?) in Godzilla: Final Wars.

The larva is remote controlled, with the imago form being controlled by wires

Mothra's chirps are actually Anguirus's roars sped up. This is most evident during a scene in Godzilla vs. Mothra where Mothra is hit by artillery and moans in pain, emitting a sound that is almost identical to Anguirus' roar. 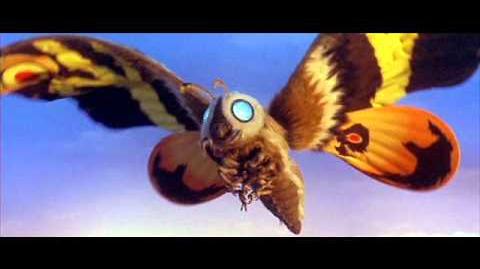 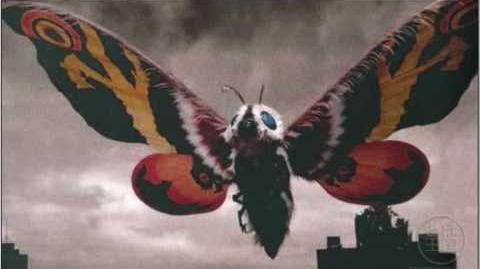 Despite having wrought destruction worthy of any Toho kaiju, Mothra is almost always portrayed as a kind and benevolent creature, causing destruction only when acting as protector to her worshipers on Infant Island or to her egg, or as collateral damage while protecting Earth from a greater threat. Mothra is usually accompanied by two tiny priestesses or fairies (often called Shobijin—Japanese for "small beauties") who also speak for her.

In Godzilla, Mothra and King Ghidorah: Giant Monsters All-Out Attack, Mothra's origin receives its first major alteration. In this film, Mothra is one of the three Guardian Monsters and the Goddess of the Sea. In ancient times, Mothra and her fellow guardians Baragon and King Ghidorah were slain by Japanese warriors.

Mothra was laid to rest under Lake Ikeda while the warriors who slayed her prayed for her soul, that she would return one day to save Japan. Thousands of years later, the prophet Hirotoshi Isayama awakened Mothra by transferring the souls of Japan's honorable dead into her, so that she and the other Guardian Monsters could together stop Godzilla.

Mothra (最珠羅,   Mosura?) was a legendary beast from ancient Japan and was known as the Goddess of the Water. Ages ago, noble Japanese warriors slayed Mothra and laid her to rest under Lake Ikeda. The warriors prayed for Mothra's soul, in the hope that she and the other guardian monsters, Baragon and King Ghidorah, would rise again one day to defend Japan.

In 2002, a group of teenagers disturbed Mothra's shrine after robbing a convenience store near Lake Ikeda. Mothra awakened and pulled the teenagers underwater, wrapping their bodies in a cocoon of silk. Mothra then encased herself in a cocoon which sat on the lake's surface. When the prophet Hirotoshi Isayama called upon the guardian monsters to stop Godzilla, Mothra emerged from her cocoon and flew to Yokohama to battle him. Mothra perched atop the Yokohama Landmark Tower and flew at Godzilla, firing poisonous stingers at him and scratching his face with her claws. Godzilla fired his atomic breath at Mothra, but she avoided the blast, which struck and destroyed the Landmark Tower instead.

King Ghidorah arrived shortly afterward and joined forces with Mothra against Godzilla. Godzilla easily overpowered both monsters, knocking Ghidorah unconscious and sending Mothra flying into a railroad track after she deflected his atomic breath from striking Ghidorah. Godzilla turned his attention to the J.S.D.F.'s battleships in Tokyo Bay, but Mothra flew behind him to take him by surprise. However, Godzilla turned his head at the last moment and fired his atomic breath at Mothra, vaporizing her. Mothra's life force flowed into Ghidorah's body, reviving him as the Thousand-Year-Old Dragon, King Ghidorah and giving him an advantage in the fight.

When King Ghidorah was ultimately killed by Godzilla, the spirit of all three guardian monsters flew into Godzilla, causing him to sink underwater and allowing the Satsuma to fire a D-03 Missile from within Godzilla's body, opening a gaping wound on his neck that ultimately caused Godzilla to destroy himself when he fired his atomic breath.

Mothra was sighted flying over the skies of Japan, prompting two fighter jets to try and shoot her down. Mothra was unaffected by the jets' missiles and continued flying to Japan. Mothra landed near the home of Shinichi Chujo, a man who had helped reunite Mothra with her Shobijin in 1961. The Shobijin appeared to Chujo and asked him to tell the government to scrap the Kiryu project, which utilized the remains of the first Godzilla as a weapon. The Shobijin claimed this was a crime against nature and the sanctity of life, and that Mothra would be forced to declare war against humanity if the first Godzilla's remains were not returned to the sea. They also promised that Mothra would take it upon herself to defend Japan from Godzilla.

When Chujo told his story to Prime Minister Hayato Igarashi, he regretfully told Chujo that the government could not afford to scrap the project, as too much had already been sacrificed for it. When Godzilla appeared in Tokyo, Chujo's grandson Shun used school desks to recreate Mothra's symbol and summon her to Tokyo. Mothra engaged in battle with Godzilla, but due to her old age was easily overwhelmed. Igarashi ordered Kiryu to be launched to aid Mothra, and the machine entered the battle as well. Godzilla defeated Kiryu, while Mothra's egg on Infant Island hatched into two twin larvae.

The larvae arrived in Tokyo to communicate with their mother, but Godzilla noticed them. Godzilla fired his atomic breath at the larvae, only for Mothra to fly in front of the beam, sacrificing herself for her children. Enraged with grief, the larvae attacked Godzilla, distracting him while Kiryu was repaired. Kiryu soon re-entered the battle, defeating Godzilla by using his drill hand to open a previously-inflicted wound on Godzilla's chest.

Mothra's larvae encased Godzilla in silk, leaving him trapped and helpless. Rather than kill Godzilla, Kiryu overrode his programming and carried Godzilla out to the sea, sinking them both in the Japan Trench. Mothra's larvae swam back to Infant Island with the Shobijin, content that the souls of the dead could now rest in peace.

She has a knack for biting and clinging to foes' tails.

As an adult, her wings can (and generally do) create gales which tear apart buildings and send other kaiju flying. Her great bulk of a body is commonly used to her advantage in battle to slam into opponents (both in larva and adult form), and her surprising levels of strength can help her to drag and even lift monsters like Godzilla.

In GMK, Mothra was able to shoot poison darts from her abdomen, but she lacked both her hurricane force winds and her poison powder.

Her final strategy is to emit "scales," a yellow poisonous powder that can usually asphyxiate an enemy. However she only uses that attack when she knows she is going to die, this is speculated, because the extreme loss of scales will cause her to lose flight.

In Tokyo S.O.S. , Mothra's powder was able to redirect both energy and physical projectiles back to their original senders, but some individuals believe that the powder of the Final Wars incarnation of Mothra instead has the ability to cause a short-circuit in electronics.

As a larva, Mothra sprays her opponents with a stream of silk as a ranged attack (to entrap or disorient an enemy).

Mothra would reprise the role of ancient guardian, though with only a passing homage to the Cosmos, in Godzilla, Mothra and King Ghidorah: Giant Monsters All-Out Attack.

However, during the events of Godzilla: Tokyo S.O.S., two new Shobijin (portrayed by Masami Nagasawa and Chihiro Ôtsuka) appear, and demonstrate telekenesis. The duo present here are much like the other fairies Mothra's around past this new ability, however.

Mothra is also playable in Godzilla: Unleashed, and played similarly to Save the Earth, but to morph into adult form, the player must press A, B, C, and Z at the same time instead of R2 and L2. Mothra appears in Godzilla 2: War of the Monsters. In early missions she is an enemy, but in later missions will appear as a friendly unit if her egg is found (being near the egg heals her). Both her adult and larva forms appear in the game.

The Millennium Mothra seen during the events of Tokyo S.O.S. makes an appearance within the Kaiju Collection game for mobile devices.

Mothra's name remains the same across many languages employing the Latin alphabet.

This is a list of references for Mothra (Millennium). These citations are used to identify the reliable sources on which this article is based. These references appear inside articles in the form of superscript numbers, which look like this: [1]