In the films, Mothra Leo is simply referred to as "Mothra." Official Japanese publications usually refer to him as "New Mothra" or "Exceled Mothra." The name "Mothra Leo" (モスラレオ,   Mosura Reo?) comes from a song from the soundtrack for Rebirth of Mothra, which plays when Leo creates his cocoon. English-speaking fans began using this name to refer to Leo, and official English releases of the soundtrack used variations of this name, such as "Mothraleo" and "Mothra Reo." Each of Mothra Leo's forms he takes on after his larva and imago forms have their own names, although "Aqua Mothra" is the only one that is individually trademarked.

Mothra Leo takes on many different forms and appearances over the course of the Rebirth of Mothra trilogy. In his larval form, Leo looks very similar to Mothra's larval form from Godzilla vs. Mothra, however he is lighter in color. After transforming into his imago form, Leo resembles his mother's imago form, but has several distinguishing features. His wings are somewhat more triangular and have different designs and color schemes. His abdomen is more rounded and less defined than Mothra's. Leo also has green eyes, three beads on his forehead, and feather-like antennae, resembling those of a male moth. After transforming into Rainbow Mothra in Rebirth of Mothra II, Leo's wings change from orange and green in color to all of the colors of the rainbow. As Aqua Mothra, Leo's appearance is more streamlined, and he lacks fur. Leo's wings are replaced with four fins, and he also gains fins on his tail.

In Rebirth of Mothra III, Rainbow Mothra's design changes. He now has a slightly longer body of 25 meters where he was 24 meters in length previously[1][2], a less bulky body, thinner legs, and backward-facing antennae. Leo's wings are a combination of blue, orange, black and white rather than all of the colors of the rainbow, and his eyes are blue rather than green. His form Light Speed Mothra looks almost identical to Aqua Mothra, but is blurry due to its quick movement. As Armor Mothra, Leo possesses a silvery armored shell around his body, with sharp jagged wings with different patterns. In his final form, Eternal Mothra, he looks very similar to Armor Mothra, only without the armored shell and with white fur all over his body.

Mothra Leo's roars consist primarily of altered Mothra roars, which have been modified to sound deeper and more masculine. As Armor Mothra, Leo's roar is very mechanical-sounding, sounding almost like a drill. 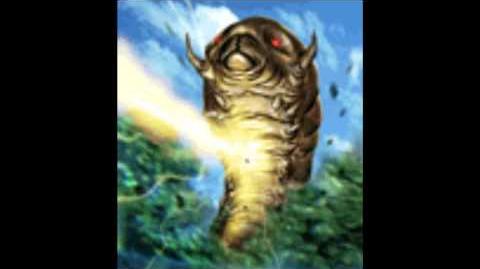 Leo differs from Mothra as he is commonly labelled as a male. Plus, unlike Mothra who is usually portrayed as being concerned more for the plights of her homeland and people, Leo takes on a more active role as a protector of the Earth, as well as taking on a Gamera-like affection for children.

In the Rebirth of Mothra universe, Leo and Mothra were the last remaining members of a highly advanced species of giant moths created as guardians to the Elias, an ancient civilization of small yet powerful humanoids far older than humanity.

Leo first appeared as an egg laid by an aged and weakened Mothra in 1996. He hatched prematurely during a battle between his mother and a monster called Desghidorah and, despite being hopelessly outmatched in his larval form, attacked his mother's aggressor. After a long battle, the two managed to escape, though by that point, Mothra had been badly wounded, and she collapsed into the sea. Despite his best attempts to help her, Leo could do nothing as he watched his mother sink into the depths. Leo then retreated to a remote island where he cocooned himself against a 10,000 year old tree.

After some time, Leo emerged as a swarm of multicolored butterflies which merged into one giant insect. Leo then flew to Hokkaido to do battle with Desghidorah, and arrived in a flurry of laser and energy beams. The demonic dragon could not stand against the power of the new Mothra and was soon defeated. With the help of the Seal of Elias, Leo imprisoned the beast once again within its ancient tomb. Leo then went on to replenish the land destroyed by Desghidorah, releasing a powder that sped up the growth of Hokkaido's flora. With the forests and fields returned to their original beauty, Leo returned to Infant island.

Mothra Leo was called upon again when an ancient pollution-eating monster called Dagahra began infesting the ocean with toxic parasites called Barems. Leo attacked Dagahra and seemed to have the upper hand, until the battle was taken underwater. Unable to combat Dagahra in his element, Leo was overwhelmed by a swarm of Barem and awaited his opponents' killing blow. However, with the assistance of the Elias, Mothra Leo was replenished by the water spirit Ghogo and was transformed into a new form, Rainbow Mothra (レインボーモスラ,   Reinbō Mosura?). Suffused with the water spirit's ancient magic, Rainbow Mothra re-entered the fray, relentlessly assaulting Dagahra. Yet, when the toxic one retreated below the waves, Rainbow Mothra followed suit and dove under the water, transforming himself into his new aqua form, Aqua Mothra (アクアモスラ,   Akua Mosura?), and finishing off Dagahra. With his foe defeated, Rainbow Mothra then flew off into the horizon and thus, the world is once again safe.

In this television series, Mothra Leo is one of the island's residents. Like Rebirth of Mothra, Leo starts off as a larva before metamorphosing into an imago after the death of his mother.

If need be, Mothra Leo has the ability to change his colors, becoming virtually invisible via camouflage.

Mothra Leo can fire a highly explosive beam of green from his chest.

As a larva, Mothra Leo sprays his opponents with a stream of silk launched from his mouth as a ranged attack to entrap or disorient an enemy. Additionally, his spray unleashed multicolored electrical aftershock.

In addition to being able to fly at the speed of mach 15.5, as an adult, his wings can (and generally do) create gales which tear apart buildings and send other kaiju flying. His great bulk of a body is commonly used to his advantage in battle to slam into opponents (both in larva and adult form), and his surprising levels of strength can help him to drag and even lift monsters.

Mothra Leo is able to release green powder from his wings which can reflect energy attacks as well as weaken and cause pain to his opponent.

By flying over badly damaged and burnt areas of forest, Mothra Leo is able to speed the growing process of plants and return life to vegetation.

In addition to being able to fly at the speed of mach 15.5, as an adult, his wings can (and generally do) create gales which tear apart buildings and send other kaiju flying. His great bulk of a body is commonly used to his advantage in battle to slam into opponents (both in larva and adult form), and his surprising levels of strength can help him to drag and even lift monsters, such as Cretaceous King Ghidorah.

Rainbow Mothra can create an invisible force field around his body that is able to deflect any enemy energy beams.

Rainbow Mothra is able to release rainbow powder from his wings which can reflect energy attacks as well as weaken and cause pain to his opponent.

Rainbow Mothra can transform into Aqua Mothra and then Lightspeed Mothra. Should both form be used, he can revert back to Rainbow Mothra.

As in his name, Aqua Mothra is capable of swimming, reaching speeds of 200 knots.

Aqua Mothra can create an invisible force field around his body that is able to deflect any enemy energy beams.

Aqua Mothra can transform into either Rainbow Mothra or Light Speed Mothra.

When in flight, Light Speed Mothra is able to travel through time.

Light Speed Mothra can change back into Aqua Mothra and back into Rainbow Mothra.

Hence his name, Armor Mothra's entire body has a thick, protective armor that protects him even from the strongest energy-based attacks. With this body, Armor Mothra was able to effortlessly endure King Ghidorah's gravity beams without any sufficient injury or fatigue.

In addition to being able to fly at the speed of mach 15.5, Armor Mothra's wings can (and generally do) create gales which tear apart buildings and send other kaiju flying. His great bulk of a body is commonly used to his advantage in battle to slam into opponents and his surprising levels of strength can help him to ram into other monsters and push them for a long period, such as Grand King Ghidorah. Armor Mothra also uses razor sharp wings to cut through objects and other monsters alike.