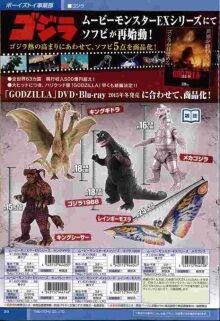 The Movie Monster EX series' first wave was released on February 14, 2015. Each figure was priced at ¥1600. The first wave included Godzilla 1968, King Ghidorah 2001, Rainbow Mothra 1998, King Caesar 1974 and Mechagodzilla 1974. Every figure in the first wave was taken from America's Bandai Creation's Godzilla line—which had not been released in Japan—and had the same molds and paint jobs (save for the Rainbow Mothra 1998 figure, which has slightly different paint job from its American release).[1]

Rainbow Mothra 1998
Add a photo to this gallery

This is a list of references for Movie Monster EX (Bandai Japan Toy Line). These citations are used to identify the reliable sources on which this article is based. These references appear inside articles in the form of superscript numbers, which look like this: [1]

Retrieved from "https://godzilla.fandom.com/wiki/Movie_Monster_EX_(Bandai_Japan_Toy_Line)?oldid=403762"
Community content is available under CC-BY-SA unless otherwise noted.