Orga (オルガ,   Oruga?) is a Millennian kaiju created by Toho that first faced Godzilla in the 1999 Godzilla film, Godzilla 2000: Millennium.

Orga's name is derived from "Organizer G-1," the name of the substance in Godzilla's cells that is the source of his extreme durability and regeneration in the Japanese version of Godzilla 2000: Millennium.

Orga somewhat resembles a warped and deformed version of Godzilla, due to his absorption and subsequent mutation from Godzilla's DNA. Orga has a massive hunched back, a small rectangular head, two gigantic hands with three long fingers, small legs, and a stubby tail. Orga's skin has a bumpy uneven texture. When Orga begins to absorb more of Godzilla's DNA, he mutates even further and begins to develop green scaly skin and huge purple dorsal plates. Orga also bears a slight resemblance to the TriStar Godzilla, which, according to the audio commentary for the American version of Godzilla 2000, may have been intentional.

Orga seems to have retained most of the behavior of the collective Millennian that preceded him, and in Godzilla 2000: Millennium was a very inexperienced fighter. He was only able to land a single punch on Godzilla, and spent most of the battle trying to avoid Godzilla's attacks. Orga seems to have lost some of the Millennian's intelligence and is only focused on the simple goal of fully assimilating Godzilla's DNA. This proved to be Orga's downfall when he attempted to swallow Godzilla whole and was destroyed from the inside. Orga displays some degree of intelligence, however, and is able to telepathically summon his ship to fight alongside him and uses it to absorb a blast of Godzilla's atomic breath before it hits him. Despite his lacking hand-to-hand capabilities, Orga makes full use of the devastating plasma cannon on his shoulder.

In the comic series Godzilla: Rulers of Earth, Orga is portrayed as an out-of-control brute that attempts to eat anything it comes into contact with. Orga even attempts to eat Gigan at one point, even though the two kaiju were allies.

Orga was originally a group of Millennians, aliens who had crash-landed on Earth's oceans in their advanced spaceship, where they were trapped due to not being able to receive sunlight. Inside the ship, the aliens converted their bodies into biomass and went dormant for several thousand years. After being reawakened after a submarine shined its lights on the ship, the Millennian UFO went off looking for genetic material to make its form stable and allow it to adapt to Earth's atmoshphere. Once the UFO discovered Godzilla, it determined that he was the ideal vessel for their conquest of Earth due to the Organizer G1 in his cells, which granted him almost limitless durability. The Millennian UFO subdued Godzilla and absorbed his DNA, then the Millennians combined their biomass into a single physical form and emerged from the UFO. However, the Millennian was unable to withstand the volatile properties of Godzilla's DNA, and mutated out of control until it became Orga.

Orga was created when the Millennian UFO absorbed some of Godzilla's cells. The Millennians within took on a giant collective form and stepped out. However, the Organizer G1 present in Godzilla's cells had an unanticipated side effect and caused the Millennian to spontaneously mutate into Orga. At first, Orga attempted to use the information the Millennians taken from computers to communicate with Godzilla, but became bewildered when Godzilla began to attack. After that, Orga chose to attack with brute force. Godzilla's atomic beam was no use against Orga due to its regeneration powers, which allowed it to heal brutal injuries in a matter of seconds, far faster than Godzilla. Orga then directed the Millennian UFO to help him fight Godzilla, but it was heavily damaged, and was taken down by Godzilla quickly when he fired his atomic breath at Orga only for the UFO to block it. It was soon discovered that Orga was attempting to become a clone of Godzilla when he bit his arm and absorbed more genetic material. Orga then attempted to swallow Godzilla whole, unhinging his jaw and opening his gaping maw. Godzilla ran headfirst into Orga's mouth and allowed himself to be swallowed. Orga began to grow dorsal plates and increase in height, but started to notice something was wrong when Godzilla began to glow and give off intense heat. Before Orga could react, Godzilla unleashed his nuclear pulse from within Orga's body, destroying Orga's entire upper body in a fiery explosion. After the smoke cleared, Godzilla roared at Orga's headless corpse, which fell over and crumbled into dust.

"Orga was originally an advanced bio-spaceship sent to Earth by an unknown alien force. Upon meeting Godzilla, the bio-spaceship came to the conclusion that it required hand-to-hand combat capabilities to subdue Earth's monsters. Mutating rapidly, the alien ship configured itself into a paragon of monstrous strength-with incredibly large hands and a flexible, venomous maw. Although initially defeated by Godzilla, Orga has subsequently joined forces with the Vortaak in order to continually test himself against Godzilla and the rest of Earth's Defenders." 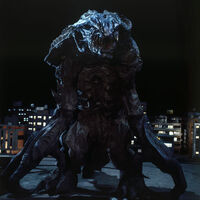 A monster created by the Millennian space aliens who absorbed Godzilla's potent self-regenerating "Organizer G-1" cells but were unable to maintain control of the reaction. In an effort to find a new home after their own world was destroyed, the Millenians traversed space in a UFO before arriving at Earth 60,000 millennia ago, during which time their bodies degenerated into quantum fluid to due prolonged exposure to radiation in space. They lay dormant at the bottom of the sea until they used energy from the light of an underwater sea exploration vehicle to revive themselves, and then proceeded to plan their conquest of Earth. The mutated Orga, with a new ability to regenerate immediately after being injured, fought Godzilla and attempted to assimilate it by swallowing it whole from the head down.

Orga in Godzilla: Save the Earth

Orga in Godzilla: Kaiju Collection
Add an image to this gallery

Orga first appears in Rulers of Earth #6. In this issue, the upgraded Gigan is sent by the Cryog aliens to retrieve the Millennian UFO from Area 51. Gigan and the UFO then proceed to Las Vegas, where they are soon attacked by Godzilla and M.O.G.U.E.R.A.. Gigan manages to subdue the monster king while the UFO absorbs his DNA and becomes Orga. Orga and Gigan appear to have the upper hand over Godzilla and M.O.G.U.E.R.A., until Orga goes berserk and attempts to eat his cybernetic ally. Jet Jaguar soon arrives on the scene and flies down Orga's throat then grows to gigantic size, causing Orga to explode.

In Rulers of Earth #7, the Cryog see that Orga is still alive and attempting to regenerate, so they place his biomass into a spacecraft. In Rulers #8, before the Cryog spacecraft is destroyed by Biollante, Gigan and the spaceship containing Orga manage to escape into space. Orga does not appear again in the series after this, as Gigan reappears later without Orga to fight SpaceGodzilla.

Orga had different roars in the Japanese and North American versions of Godzilla 2000: Millennium. In the Japanese version, Orga's roar was a stock roar originally used for Cretaceous King Ghidorah in Rebirth of Mothra III from the previous year.

In the Pipework gaming lineage (much like with the Toho cast) Orga is given an all new arrangement of roars most of which are guttural-like roars and snarls; these sounds were composed from the growls of wolves and a human-like rasp and slowed to create Orga's iconic game roar.[2][3]

Retrieved from "https://godzilla.fandom.com/wiki/Orga_(G2K)?oldid=255008"
Community content is available under CC-BY-SA unless otherwise noted.