95 minutesJP
(1 hour, 35 minutes)
Pulgasari (プルガサリ：伝説の大怪獣? Purugasari: Densetsu no Daikaijū, Lit. Pulgasari: Monster of Legend) is a 1985 tokusatsu kaiju film produced by a North Korean film studio. It was released to North Korean theaters in 1985 and to Japanese theaters on July 4, 1998.

In feudal Korea, during the Goryeo Dynasty, a King controls the land with an iron fist, subjecting the peasantry to misery and starvation. An old blacksmith who was sent to prison creates a tiny figurine of a monster by making a doll of rice. When it comes into contact with the blood of the blacksmith's daughter after sticking herself with a pin wile repairing some clothes, the creature springs to life, becoming a giant metal-eating monster named Pulgasari. After he kills the king and fulfills his purpose, he becomes a nuisance, eating all of the farmers' iron tools to survive. But, Ami tricks Pulgasari into eating her by hiding in a iron gong, causing him to turn into a stone statue and crumble away. 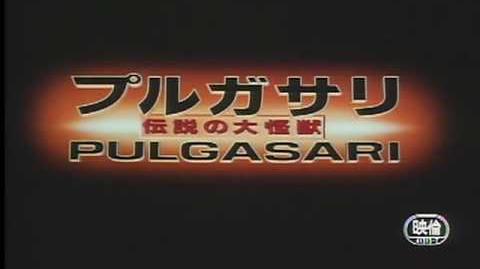