Rebirth of Mothra (モスラ,   Mosura?, lit. Mothra) is a 1996 tokusatsu kaiju film produced by Toho, and the first entry in the Rebirth of Mothra trilogy. The film was released to Japanese theaters on December 14, 1996.

Millions of years ago, a titanic terror from another realm arrived to destroy the planet Earth. Named Desghidorah, this three-headed dragon was forced to deal with resistance in the form of a species of highly advanced, enormous moths. These monsters were the protectors of the Elias, a race of tiny, human-like, beings who inhabited the planet. After the ensuing battle, Desghidorah was defeated and sealed within the Earth, although a great deal of life on the planet Earth was lost. Three Elias: Moll, Lora, and Belvera, were all who were left of their once prosperous civilization. Though the benevolence of Moll and Lora was undeterred, Belvera became twisted and vengeful due to the mass extinction of her race. These tiny fairies, along with one final guardian named Mothra, lingered on for thousands of millennia.

In order to preserve her species, Mothra gave birth to an egg in 1997; however, she became physically exhausted from the ordeal. Shortly thereafter, a logging company uncovered the subterranean prison of the demonic hydra that had ravaged the Earth so long ago. When the seal that had bound the creature was removed from the area; Moll and Lora fought Belvera for control of the artifact, with Taiki and his mother unsuccessfully trying to intervene and Wakaba knocked out cold during the entire battle. Belvera prevailed and managed to release Desghidorah from its rocky tomb, in order to exact her warped plans for destruction. Mothra was summoned to halt the detestable dragon, which was absorbing the life out of the environment. She fought a long and difficult battle to repel her ancient adversary, and in response to her declining strength, her young son, Mothra Leo, hatched in order to assist his mother. Though his energized silk seemed to turn the tide of battle in the favor of the protectors, Desghidorah sank the teeth of two of his heads deep into Leo and Mothra became desperate. She quickly airlifted her son to safety, and in order to keep Desghidorah at bay, she lured the beast into a dam. With Desghidorah distracted by a wall of raging water, Mothra carried her son to safety. Unfortunately, Mothra's wounds, age, and exhaustion were ultimately too much. Her strength failed, and she plummeted into the sea below. The crestfallen larva attempted to save his beloved mother, but she sank in the ocean, to no avail. Angered, the young moth created a cocoon and began to change into his adult form. Desghidorah had to be defeated; his mother's death couldn't be in vain.

Leo emerged into his adult form as a swarm of multi-colored butterflies. As the butterflies coalesced into one massive insect, Leo took to the air and headed back towards Desghidorah, righteous fury burning in his wake. Arriving in a hail of energy beams, Leo relentlessly blasted his mother's murderer, throwing wave upon wave of searing beams and energy blasts at Desghidorah, who could only feebly attempt to defend himself against this, the most powerful Mothra of all time. Drawing upon an ancient legacy, Leo relentlessly assaulted Desghidorah, eventually renewing the seal that bound the world destroyer beneath the soil of the earth.

Taiki and Wakaba ride upon Leo while their parents lament over having killed the environment. Their guilt and mistake, however, are undone by Leo restoring balance into the blasted region deforested by the assault of Desghidorah. His work done for the time being, Leo went to his ancestral home and planet Earth was finally safe from Desghidorah.

Rebirth of Mothra was released on DVD by TriStar Pictures in 2000 in a double pack with Rebirth of Mothra II. In 2014, TriStar released the original Japanese cut of the film in a Blu-ray set with the later two entries.

This film is widely praised by both Godzilla and Mothra fans alike. 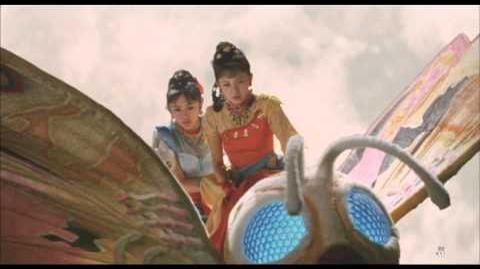 This is a list of references for Rebirth of Mothra. These citations are used to identify the reliable sources on which this article is based. These references appear inside articles in the form of superscript numbers, which look like this: [1]