Rebirth of Mothra II (モスラ2 海底の大決戦,   Mosura Tsū Kaitei no Daikessen?, lit. Mothra 2 Submarine Great Battle) is a 1997 tokusatsu kaiju film produced by Toho, and the second entry in the Rebirth of Mothra trilogy. It was released to Japanese theaters on December 13, 1997.

In the year 1997, only one year since Mothra Leo, the most powerful Mothra of all time, emerged and defeated the demonic Desghidorah, strange things have begun to occur in the world's oceans. In Japan, a fisherman is attacked by a strange sea star-like creature, and another odd animal appears before two other men at sea. On the island of Okinawa, the same, furry creature is discovered again, but this time by a little girl named Shiori. Unfortunately, as she examines the creature, she is spotted by a couple of bullies from her school. She had ratted on them earlier that day, and the two boys were out for revenge. She runs and hides, but is soon discovered. But before the two kids can do anything to Shiori, they hear a voice from above them and look up to see a small, dragon-like creature hanging from a tree branch. As it swoops down at them, they notice a small woman riding on its back. The woman demands the return of the furry animal, whom she identifies as a "Ghogo". Shiori holds out the flower basket in which she placed the Ghogo and the dragon quickly snatches it and flies away. Back on the ground, Shiori grabs the Ghogo, whom she had removed from the basket before handing it over to the woman and her steed, and flees. A few seconds later, the woman and her dragon, who are none other than the evil Elias Belvera and her robotic counterpart Garu-Garu, realize that they have been tricked and fly after the little girl. As Shiori runs, she and the two bullies are fired at by Garu-Garu's energy beams. Suddenly, something behind Belvera fires at her, and the small Elias turns around to see none other than her two sisters, Moll and Lora, pursuing her on their own steed, Fairy. As the sisters battle, Shiori and the two boys run through the woods ,protecting the Ghogo from harm. They eventually emerge onto the beach and succeeded in loosing Belvera. Unfortunately, one of the boys cut open his knee after a nasty fall. As he holds the small Ghogo, the small creature literally urinates on his leg, and the three kids watch in awe as the liquid rapidly heals the wound. The children are then greeted by Moll and Lora, who explain that the Ghogo is an ancient creature from the ancient city of Nilai Kanai, a supposedly legendary place home to a technologically advanced people. Thousands of years earlier, the people of the Atlantis-like civilization had developed quite a problem with pollution, which had poisoned the oceans. In order to counteract the pollution, the ancients created a garbage-eating monster named Dagahra. Unfortunately, as a by-product of the creature's consumption of pollution, Dagahra produced Barums, large sea star-like creatures that began to kill all life in the ocean. Eventually, Dagahra turned against its creatures and both the monster and the civilization fell beneath the waves. But now, with the reemergence of pollution into the sea, Dagahra had awoken to ravage the environment yet again. It was now producing Barums at an uncontrollable rate, and soon all life in the oceans would be rendered extinct. The only hope to save the world from the Barums, according to Moll and Lora, was to use the legendary treasure of Nilai Kanai against them. The Ghogo had ventured ashore to find someone to help find the treasure. Shiori and her two friends agree to help.

The three kids, along with Moll, Lora, Fairy, and the Ghogo, row out to sea in a small boat, and discover an ancient temple under the surface of the water. The Ghogo descends to the temple and enters the ancient structure. A few moments later, a bright light erupts from the temple and surrounds the boat, bringing them down into the pyramid below. A few seconds later, the temple begins to rise from the sea, and soon the gigantic structure stands above the surface once again. However, Dagahra, detecting the presence of the revived structure, soon arrives and attempts to attack it. The pyramid, however, fights back and four dragon-like towers positioned on each corner fire a rainbow beam that eventually repels Dagahra. Unfortunately, the giant creature then begins to head for the mainland, and Moll and Lora decide that the only thing they can do now is call Mothra. They leave the children temporarily and sing their beautiful song to summon Leo from Infant Island. Far away, the majestic moth hears the cries of her two tiny avatars and quickly flies towards Okinawa. Leo arrives and nearly succeeded in defeating Dagahra, until the sea monster took the battle underwater where it was in its element. Dagahra incapacitated Leo by covering him in Barem. Leo landed on the newly raised Ninai Kanai temple, but before Dagahra could give the killing blow, the structure activated and defended Leo. Dagahra was held off until Leo turned into Rainbow Mothra. After taking a severe beating, Dagahra once again retreated into the water, where Rainbow Mothra turned into Aqua Mothra. This time Leo's new form allowed him to overpower the sea monster. Leo finally finished Dagahra by turning into thousands of Mini-Aqua Mothra's and entering Dagahra's body to destroy its Barem producing organs, killing it and his Barem. Dagahra was then dropped on the temple which reduced to water along with the sea monster's body. Aqua Mothra returned to his single form, then turned back into Rainbow Mothra. He had saved humanity once again.

Rebirth of Mothra II was released on DVD by TriStar Pictures in the U.S. in 2000 in a double pack with Rebirth of Mothra. The original Japanese version of the film was later released in a Blu-ray set with the other two entries in the trilogy in 2014.

The film is widely considered the weakest of the Rebirth of Mothra trilogy. 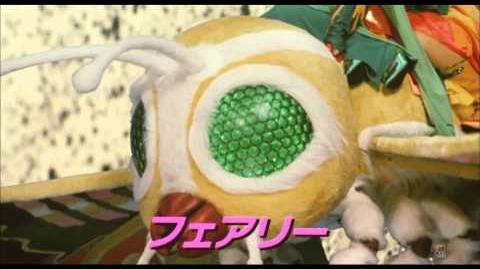 This is a list of references for Rebirth of Mothra II. These citations are used to identify the reliable sources on which this article is based. These references appear inside articles in the form of superscript numbers, which look like this: [1]

Retrieved from "https://godzilla.fandom.com/wiki/Rebirth_of_Mothra_II?oldid=392545"
Community content is available under CC-BY-SA unless otherwise noted.