Moll, Lora, and Belvera, the Elias sisters are at odds again. Belvera seeks the secret power of their ancestors, tiny triangular power units that transform the sisters' small daggers into powerful swords. She fails to retrieve the proper triangle for her sword, each power unit will only work for a specific sword, but Moll and Lora end up with a unit that transforms one of their swords.

Shortly after the Elias sisters face-off, a meteor shower brings a strange object to Earth, a huge meteor that disrupts gravity near it. As it crashes to Earth at night, a family watches. The next day, the oldest of the children, a teenage boy, plays hookey from school, and goes to investigate the object. Meanwhile, school children on playgrounds and around the nearby city begin to mysteriously vanish as a huge shadow passes overhead. Moll and Lora examine the remains of the crashed meteor, realizing that something has escaped, and sensing a great evil has been released. King Ghidorah, a space monster who visited Earth in its past, returns with the captured children to a secluded spot near where the meteor crashed, trapping them in a huge, pulsating organic dome. Belvera, intrigued by King Ghidorah's arrival, and hoping to use him for her own ends, gets too close to the dome, and is drawn inside. Later, Moll and Lora encounter King Ghidorah, and Lora is infected with the monster's evil as she stares into one of its eyes. Lora attacks Moll, under the evil influence, and Fairy falls from the sky with Moll and Lora, saving Moll before she is also trapped in the dome. Lora joins Belvera inside the dome, where the captured children are screaming and huddling together, terrified. A battle between Belvera and Lora takes place, with Belvera begging for Lora to see reason and to work with her, but Lora is still being influenced by the spell of King Ghidorah.

Back in the present King Ghidorah roars in outrage as it disappears from existence. The children are released, and the boy joins Belvera and Lora (now recovered from her infection by King Ghidorah, thanks to the love of her sisters) as they kneel by the body of their sister Moll, unsure of how they can save her. Suddenly King Ghidorah appears in the sky amidst a massive fireball. This is the other King Ghidorah which grew from the severed tail of the Cretaceous King Ghidorah killed by Rainbow Mothra in the past. The tail regenerated over time into a full-grown King Ghidorah. The new King Ghidorah starts to capture children again, when suddenly the time-capsule cocoon explodes from a mountain, and Rainbow Mothra emerges, this time as Armor Mothra, a formidable version with armour plating, thanks to his ancestors' silk. Yet another battle takes place, and this time King Ghidorah is not even a close-to match for Armor Mothra, who first slices King Ghidorah's wing off, and then proceeds to completely disintegrate the monster. Armor Mothra then communicates with Belvera and Lora, telling them to join their powers, and so using the sword bring Moll back to life. The touching reunion between the sisters is short-lived, as Belvera calls for her winged henchman, Garu-Garu, and flies off, promising more conflicts between the sisters, who disagree over how the Elias should interact with (or have power over) Humankind. The children are reunited with their parents, and Armor Mothra transforms into his final form, Eternal Mothra, and flies into the sunset.

For years, Rebirth of Mothra III was not available on DVD in the United States like its predecessors, though it was occasionally aired on the Syfy Channel. It was finally released on September 9, 2014, in a Blu-ray triple feature with the first two movies.

The film is often considered the best of the Rebirth of Mothra trilogy. Many fans praise King Ghidorah's design, powers, and role in the film, as well as the battles between Mothra Leo and King Ghidorah. 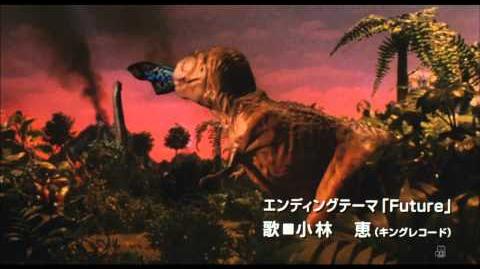 Retrieved from "https://godzilla.fandom.com/wiki/Rebirth_of_Mothra_III?oldid=294432"
Community content is available under CC-BY-SA unless otherwise noted.