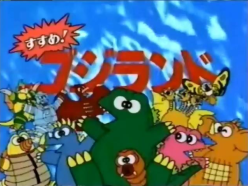 Recommend! Godzilland (すすめ！ゴジランド,   Susume! Gojirando?) is a series of four educational OVAs released to VHS in 1994 and 1996 by Gakken. They use Godzilla and other kaiju to teach children about the hiragana alphabet, counting, addition, and subtraction.

Recommend! Godzilland is loosely based on the animated segments from Adventure! Godzilland, and focuses on a young Godzilla and his friends living together on Monster Island as they learn about various subjects. The first two OVAs were released in 1994, and focused on the hiragana alphabet and counting. The next two were released in 1996 and focused on addition and subtraction. The second two OVAs are notable for introducing more monsters as well as featuring live-action segments with Godzilla (represented using the RadoGoji suit) and his human sister, where he tells her about his childhood, shown through the animated segments.

In the show, Godzilla and the other monsters are portrayed as young children that live together as friends. They live on the island with Mothra, the only adult in the show, who acts a maternal figure to the other monsters while raising her two twin larvae. Godzilla frequently gets into arguments with his best friend Anguirus, which often drive the plot of the episodes. MechaGodzilla is not part of Godzilla's group of friends, and is portrayed as being very lonely and desperate to make friends. Because of this, MechaGodzilla tries to kidnap Godzilla's friends and force them to be his new friends, forcing Godzilla and the others to save them. Despite being seen as an antagonist, the mecha's lonely nature means that he often ends up being taken in by the others as a friend once those he captures are rescued.

Godzilla and Gojirin in the opening of the second two OVAs

Moguera holding an umbrella with a Mysterian ornament

Godzilla dancing with his sister

Retrieved from "https://godzilla.fandom.com/wiki/Recommend!_Godzilland?oldid=342176"
Community content is available under CC-BY-SA unless otherwise noted.