Reptilian (용가리,   Yonggari?, lit. Yonggary) is a 1999 tokusatsu kaiju film co-produced by Younggu-Art Movies and Zero Nine Entertainment. It was released to South Korean theaters on July 17, 1999 and to Japanese theaters on November 10, 2001.

In Southeast Asian, an archaeological party explore some caverns underground. Dr. Campbell and Dr. Hughes are the two leaders of the archaeological expedition, and get separated. While Dr. Hughes finds an alien corpse with a fossilized diamond, Campbell finds hieroglyphics at the cost of the party except for Hughes and himself. Two years later, an alien mothership arrives near Earth’s orbit, which destroys two American satellites that gets the attention of Parker, who reports it to General Murdock of the United National Defense Agency (UNDA).

Bud Black, a cameraman, learns from a colleague about a dinosaur dig, led by Campbell along with his assistant Holly. Dr. Hughes, who has been believed to be dead for the last two years, shows up at the dig site to warn Campbell but is quickly removed from the site. Subsequently, the alien ship sends beams to reanimate the dinosaur but at the cost of some of the diggers’ lives.

Holly confronts Campbell about the mysterious deaths and quits after Campbell refuses to launch an investigation. Dr. Hughes manages to find Holly and reveals to her about the legend of the monster, called Yonggary, the alien fossil, additional hieroglyphics, and that he has been held by the US government as a "guest" for the last two years. She dismisses his claims at first but comes around after he shows her classified data concerning the alien fossil.

They return to the dig site to stop Campbell but arrive too late when the alien ship sends one final beam that fully resurrects Yonggary, killing Campbell in the process. The alien ship dematerializes Yonggary and Holly and Dr. Hughes are taken into custody by Parker. Yonggary is then teleported right before them and manage to escape before a helicopter squadron engage Yonggary in battle, only to be defeated. The National Space Investigation Agency (NSIA) sends Stanley Mills to share information regarding the aliens with General Murdock and General Howell.

Mills explains that a paleontologist provided the NSIA with scientific evidence that an alien civilization visited the Earth 200 million years ago and that vital information in defeated the aliens was stolen. Mills vouches in capturing the aliens alive but General Howell wishes to destroy the aliens instead. Yonggary is then teleported to a city and proceeds to go on a rampage.

Dr. Hughes and Holly arrive at the UNDA base, only to be confronted by Mills, who reveals that Dr. Hughes was the paleontologist who shared his discoveries with the NSIA and later stole information from their lab. Dr. Hughes counters that he told the NSIA that the hieroglyphics were a warning and they chose to ignore them. Mills attempts to take the stolen data disc back from Dr. Hughes but fails and attempts to leave but is forced to stay by General Murdock.

As the UNDA continues fighting Yonggary, the President tells General Murdock that he will give them five hours to destroy Yonggary or a nuclear bomb will be dropped on the monster. Looking at all their limited options, General Murdock orders General Thomas to dispatch his experimental Project T Forces to attack Yonggary.

Dr. Hughes and Holly then decode the additional hieroglyphics and discover that the aliens are controlling Yonggary through a diamond shaped receptor on his forehead and that "another great light will be sent to do battle". As Parker and the T-Forces battle Yonggary, General Murdock is then told by the President that he has sent the bombers to nuke Yonggary, to the delight of Mills.

The T-Forces then manage to break the aliens’ control over Yonggary. Mills tries to convince General Murdock to destroy him but is ignored, which forces Mills to jam the UNDA's radars unless they let him leave, however, Mills fails and is then arrested. The aliens send a new monster, known as Cykor, in order to battle Yonggary. Cykor initially gets the upper hand but Yonggary emerges victorious in the end, forcing the aliens to flee. The Generals manage to successfully stop the bomber from dropping the nuke at the last minute and the following morning, the UNDA transports Yonggary from the city to a deserted island. 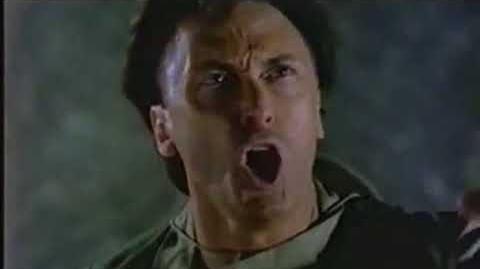 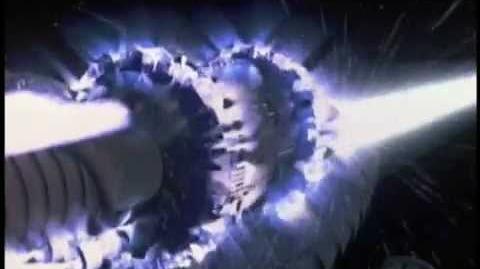 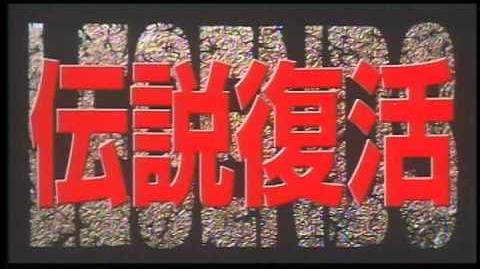 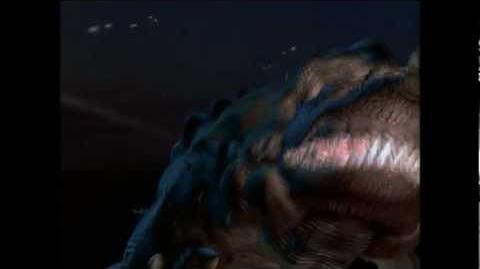 Retrieved from "https://godzilla.fandom.com/wiki/Reptilian_(1999_film)?oldid=339999"
Community content is available under CC-BY-SA unless otherwise noted.