Cloverfield (cameo after the heli crash)
Rhedosaurus is a fictional giant carnivorous man-eating lizard-like monster from the 1953 American film The Beast From 20,000 Fathoms.

The Rhedosaurus is the sole surviving member of a species of lizard-like dinosaur that lived past the K-T extinction. The species lived as far back as the Middle Paleolithic, which was around the time the individual from the film was frozen in the Arctic.

The Rhedosaurus in the film was one of the last surviving members of its species, awakened by a nuclear weapons test in the Arctic. It made its way down the North American coast, destroying everything in its path and ending up in New York, its original home. Attempts to kill it were complicated by an ancient disease it carried; spilling its blood freed the plague, which was almost as deadly as the reptile itself. The Rhedosaurus was eventually killed at Coney Island when a radioactive isotope was shot into a wound on its neck, both fatally wounding it and also neutralizing the disease. As the Rhedosaurus succumbed to the isotope, a fire it started by destroying the machinery of a roller coaster spread across the island. The Rhedosaurus burst free of the burning coaster and roared out defiantly before finally collapsing to the ground, dead.

The Rhedosaurus' blood contains a deadly germ that can enter the bodies of other organisms which cause severe sickness and eventually death.

The Rhedosaurus' scaly skin allows it to be unharmed by guns or tanks.

The Rhedosaurus has razor sharp teeth and claws that allows it to do severe damage to it's attackers. 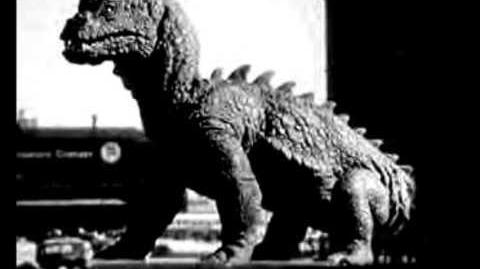