The demonic Rodan is a giant pteranodon kaiju created by IDW that first appeared in the 2015 Godzilla comic, Godzilla in Hell.

Rodan resembles a large pterosaur that walks upright on two legs. Rodan has two horns on the back of his head, and a spiked chest. The sclera on his eyes is orange, without pupils.

Rodan seems to have little personality. Rodan remains quiet and angry during his battle against Godzilla, focusing only on the battle.

Rodan appeared in the second issue of the IDW mini-series Godzilla in Hell, where he confronted Godzilla in a city in Hell. Rodan charged at Godzilla and dodged his atomic ray. He then soared into the clouds to try a sneak attack on Godzilla, but Godzilla defeated the demon by slamming his tail into him, causing him to crash into the doomed cities of Hell.

Rodan's only known ability. He's fast enough to avoid Godzilla's atomic breath, although he still managed to get defeated by him with a tail whip after approaching Godzilla. 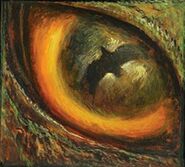 Rodan is spotted by Godzilla.

Rodan faces off against Godzilla.