Sanda (サンダ,   Sanda?) is a Frankenstein-spawn kaiju created by Toho that first appeared in the 1966 Toho film, War of the Gargantuas.

Sanda resembles his "brother" Gaira, being a humanoid giant covered in fur and scales. He is also significantly larger than Gaira. Unlike Gaira, Sanda has a more human-like face and what appears to be a beard on his chin. Sanda's fur and scales are a light-brown color. In Go! Godman, Sanda's suit has heavily decayed, and most of the hair on his body has fallen off, while the hair on his head is much longer. In the follow-up series, Go! Greenman, Sanda's suit is still decayed, but his head has been replaced with a more ape-like head.

In War of the Gargantuas, Sanda is gentle and caring, due to being lovingly raised by human scientists, including Akemi Togawa, when he was an infant. Personality-wise, Sanda is very similar to Frankenstein, the monster that spawned him. Due to being raised by compassionate humans, both monsters are gentle towards humanity and risk their lives to battle monsters that threaten humans. After learning that his "brother," Gaira, is under attack by the J.S.D.F., Sanda rescues him but does so non-violently, refusing to fight back against the military. Sanda tries to keep Gaira safe and help him recuperate but grows angry when he learns that Gaira is attacking and killing humans. When Gaira attacks Tokyo, Sanda decides to kill his brother rather than let innocent humans die.

In Godzilla: Rulers of Earth, Sanda retains most of these traits. Sanda has desperately been searching for Gaira and follows him to the Pacific Ocean after Gaira escapes from a Chinese military facility. When Sanda finds himself surrounded by military forces after coming ashore in Australia, he surrenders and refuses to fight them. Upon seeing Gaira destroying the military forces, Sanda becomes distressed and tries to stop his brother. Despite this, Sanda has a strong loyalty to Gaira and will do whatever he can to protect him without endangering human lives.

Sanda's orignal roars in War of the Gargantuas reused those of King Kong but at a slightly lower pitch. In Go! Godman, Sanda reused one of the ultra kaiju Tyrant's roars. 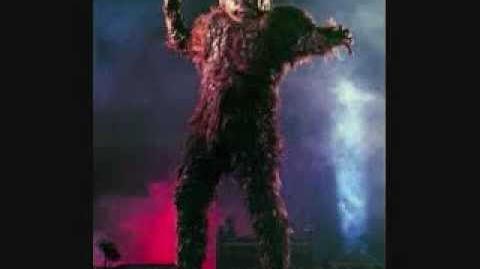 Sanda Roars
Sanda's roars from War of the Gargantuas

In War of the Gargantuas, Sanda is believed to be the result of some of Frankenstein's flesh breaking off in the mountains of Japan. Over time, this severed flesh grew into Sanda, who was discovered by scientists. As a child, Sanda grew up in a research facility under the care of Akemi Togawa. Eventually, Sanda escaped and returned to the mountains, where he grew to 30 meters in height. Due to his upbringing, Sanda became a gentle and kind creature with a favorable view of human beings.

Sanda grew from the flesh of Frankenstein, along with Gaira. He was captured by scientists and studied when he was small, but he escaped to the mountains. Five years later, Sanda grew to 30 meters in height. He returned to save Gaira from the J.S.D.F., and took him to the mountains. Due to his upbringing around people, learning that Gaira attacks and eats humans angers Sanda. Sanda assaulted Gaira, but, after a brief fight, Gaira fled, and Sanda followed. Gaira returned to Tokyo, and Sanda fought him again. They carried their battle out to sea, but they were pulled into a volcano and presumably killed.

Sanda also appears in Go! Godman as a villain. He was the nineteenth kaiju to battle Godman.

Sanda reappears in Go! Greenman. Sanda has a new head and wig and can breathe a highly toxic mist from his mouth and change his size. He was the thirty-second kaiju to battle Greenman.

Sanda is first seen in the comics on a lone mountain range, watching as his 'brother' Gaira and Varan flew into the distance, and encountering Lucy Casprell. At some point, the brown Gargantua gave chase and dove into the ocean, which the two brawling monsters landed. Sanda chased his enraged brother over a severely angered Godzilla, who followed the two. Sanda was knocked out off-panel and came to, surrounded by military. Suddenly, Gaira dove onto him, but to protect him from Godzilla's beam. The green Gargantua then hurried to keep his injured brother safe, smashing a tank that almost shot the brown giant. This angered Sanda, and the two had a small fight, only to have it broken up by another heat beam. The two brothers worked together to fight Godzilla, until Sanda smashed a Saradian petrol tanker over Godzilla's face, causing the monster king to retreat. Gaira, now knocked out and injured, was protected by Sanda, and the two were transported to the new Monster Islands. There, Sanda lived with his brother alongside Baragon, Kumonga, Rodan and Zilla. At one point, Sanda was seen battling Kumonga alongside Baragon. When the Trilopods attacked the Monster Islands, Sanda was getting strangled by a Trilopod with Kumonga's traits, only to be saved by his green brother.

However, Trilopods eventually captured Sanda and his brother and copied their characteristics. While their Trilopod clones went to fight Godzilla in Los Angeles, Sanda and Gaira were kept in the Trilopod hive, until King Caesar broke all the Earth monsters free. Sanda, along with every other monster captured in the hive, rushed to fight the Trilopod swarm, and then tried to attack Magita when the massive Trilopod appeared, only to be swatted to the side. When Godzilla destroyed Magita, Sanda, and every other monster present followed the monster king into the ocean.

Sanda is a capable hand-to-hand combatant.

Sanda appears to have human-like intelligence. In Godzilla: Rulers of Earth, he demonstrates the ability to use improvised weapons.

Like Gaira, Sanda can completely grow back from just a few of Frankenstein's cells.

In Go! Greenman, Sanda can breathe toxic mist from his mouth.

In Go! Greenman, Sanda can alter his size after Tonchiki casts his trademark magic spell.

This section is a stub. You can help expand this section by adding some information.