Shin Godzilla (Playstation 4 VR Demo)
Shin Arima was a collaborative video game based on the 2016 Godzilla film, Shin Godzilla, and the Arima Kinen event, that was available to play for free on the internet. As of late 2016, the game has since been taken down, with the website's contents being overwritten.

The game centered around training a horse to race around a wide range of courses and environments, while collecting blood coagulant to stop Godzilla's rampage.

The first category was "speed", which tasked the player with pressing the right and left keys of their respective device. The left key controlled the front legs of the race horse, while the right controlled the back.

The second was "balance", which would see the player multitasking speed with their ability to jump over obstacles in their path, while staying on track. Such obstacles include debris Godzilla kicks onto the track.

The third was "stamina", which centered around how much energy the player would burst out of the gate with, and how they could maintain it.

The fourth was "concentration", which had the player swiping the screen to push their horse forward.

The player would be required to train these four categories against twelve other animals in an effort to stand a better chance against Godzilla. This would require the player to best, outmatch or come out even against said animals in specific tasks.[1]

Following this, the player would be pitted against Godzilla in three races. Provided the player succeeds in collecting the coagulant, a game over screen would have Godzilla collapsed on his side, while multiple trucks pump the blood freezing coagulant into his body. 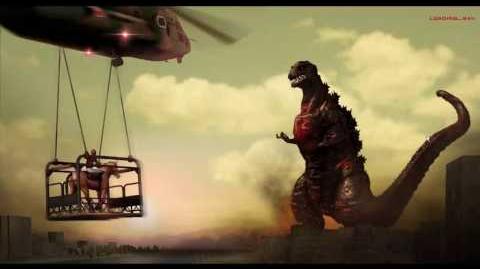