Snickers is a brand name chocolate bar made by Mars, Inc. and a sponsor of Legendary Pictures' Godzilla.

Snickers has made one Godzilla commercial.

The Godzilla Snickers commercial starts with Godzilla and four other guys just standing around a yellow car in the sand of a lake surrounded by mountains. A girl walks by and waves at Godzilla while smiling. The guys Godzilla is hanging out with are impressed by Godzilla's abilities to attract girls and high-five him, saying "How do you do it?!" and "Yeah, Godzilla!".

The next scene, in the extended version, shows Godzilla and three of the four guys holding a cooler full of ice. They pour the ice on top of the fourth guy, who was laying on the sand.

The next scene shows Godzilla partying and dancing with a girl half his size. A guy tells another guy "Godzilla's actually pretty cool!". The other guy nods in agreement, but adds "Except when he's hungry." The original guy smiles and nods, looking to Godzilla.

The next scene shows Godzilla, now several stories high, firing his atomic breath at a taxi and rampaging through the city. The taxi lands near the four guys, and one of them says "Quick, grab a Snickers!". The northernmost guy unwraps a Snickers chocolate bar slightly and throws it into Godzilla's mouth. The chocolate bar successfully lands on Godzilla's mouth, which he closes and makes an "mmm" sound to.

In the next scene, Godzilla is waterboarding at the lake, and he skips across the guys, now accompanied by the girl seen previously, and soaks them in water. They cheer Godzilla on as he gives a thumbs up. The Snickers® slogan shows up, and the 2014 film is advertised at the very end.

You’re Not You When You’re Hungry®. SNICKERS® Satisfies. See more at www.facebook.com/snickers.

The SnickersGoji (スニッカーズゴジ?, SunikkāzuGoji) is the Godzilla suit design used in the 2014 Godzilla Snickers® commercial.

The SnickersGoji's name comes from the Snickers brand name and Goji, which comes from Godzilla's Japanese name, Gojira (ゴジラ?).

The SnickersGoji seems to be based on the ShodaiGoji design mostly. Its head is shaped similarly to the ShodaiGoji, with its dorsal plates being sharp and thin. It also has an animatronic mouth so that the jaw can move. Its body resembles the SokogekiGoji. It has four fingers on its hands and feet. The SnickersGoji has dozens of perfectly aligned teeth, as well as a pink mouth and tongue. It has an animatronic mouth and eyes. The suit is at least 7 feet tall—as tall or even taller than the tallest official Godzilla suit, the SokogekiGoji.

The SnickersGoji's head and its suit actor, Douglas Tait 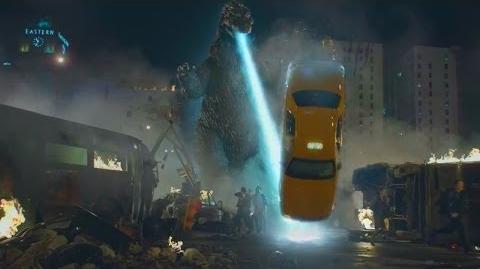 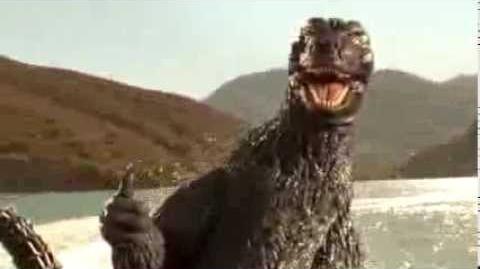