Susumu Okubo (大久保晋,   Ōkubo Shin?) is an evolutionary biologist secretly working for the Yakuza and a minor human antagonist in the 1994 Godzilla film, Godzilla vs. SpaceGodzilla.

Susumu Okubo worked on Project T and planned to gain control of Godzilla's mind. When the mind control began to fail, he turned up the power past safety limits, causing Miki Saegusa to fall unconscious. It is later revealed that he was working with the Japanese Mafia to control Godzilla for power, and has Miki kidnapped. He attempts to gain control of Godzilla's mind again, but it fails when the warehouse he is in is attacked by Akira Yuki, Kiyoshi Sato, and Koji Shinjo. Okubo is left in the warehouse as SpaceGodzilla approaches, causing rubble to fall on top of him, killing him. 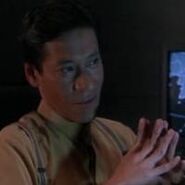 Add an image to this gallery
Retrieved from "https://godzilla.fandom.com/wiki/Susumu_Okubo?oldid=349073"
Community content is available under CC-BY-SA unless otherwise noted.