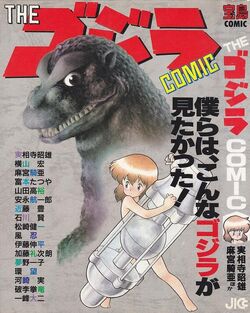 The Godzilla Comic is an anthology comic featuring the work of a vast number of different artists, and 15 original stories. The tales vary from humorous parody to darker themes. The chapters are:

In a comical short by comedian and The Monster X Strikes Back: Attack the G8 Summit (among other things) director Minoru Kawasaki, Japanese pop idol Yuki Saito is invited to join the Earth Defense Force, and uses her singing to pacify Godzilla during one of his rampages.

Another satirical take, this time poking fun at the various conference sequences of the Godzilla and other Toho monster films.

In a tale with a clear inspiration from Godzilla vs. Biollante, a human-bonsai creature defends the world from Godzilla. This story is more atmospheric in nature, and Godzilla only appears, in silhouette, in a single panel.

In 1701, Godzilla appears and battles a group of Edo period Japanese samurai.

Created by conceptual artist and suit actor of the VS series "Hurricane" Ryu, this story is a more abstract take on Godzilla and the Toho monsters are anthropomorphic warriors, and includes scenes of Godzilla slashing spaceships apart with a sword, and Jet Jaguar riding a motorcycle.

In this story Godzilla battles a monster named Gandora, and at the end mutates into a "Super Godzilla" type form.

Written by Ultraman (among other things) director Akio Jissoji, a love story takes a turn when its revealed the object of a cameraman's affection is actually an alien attempting to control Godzilla.

Easily the strangest and most controversial story in the whole book, a martial arts master learns a special killing technique to use against Godzilla. Against all odds the move works and Godzilla is killed, though at the cost of his own life, leaving his pregnant wife a widow. Not long after the child is born, he starts behaving strangely, and he reveals that he is actually Godzilla reincarnated in human form before attacking his mother. The story from there takes a ride through the spirit world.

Another humorous story that's something of a crossover with the author's own Salaryman-style comic character.

Gigan and King Ghidorah return, and Godzilla and Mothra engage them in Antarctica.

Kamoebas, King Caesar, and Anguirus discussing amongst each other

Godzilla sitting, before being armored

Godzilla slicing Biollante's head off with his sword, before being armored

Godzilla being stabbed by a drill

Godzilla arrives in a city

Godzilla smashes the robot monsters into each other

The monsters are finished off by Godzilla's atomic breath

Godzilla kills Gandora
Add an image to this gallery

Retrieved from "https://godzilla.fandom.com/wiki/The_Godzilla_Comic?oldid=270280"
Community content is available under CC-BY-SA unless otherwise noted.