Wealthy big-game hunter Masten Thrust, using his company's advanced drilling vehicle, the Polar-Borer, leads an expedition to a mysterious underground pocket beneath the North Pole which is inhabited by several dinosaurs and other prehistoric creatures, including a tribe of primitive humans. The expedition takes a dangerous turn when a Tyrannosaurus rex destroys the Polar-Borer, leaving the crew stranded in a mysterious primitive world, where they are stalked by the T-Rex and various other dangerous creatures.

The Last Dinosaur was scheduled for theatrical releases in both Japan and the United States, however it was decided at the last moment to release the film straight to television in the U.S. The film was aired on television by ABC, and had 11 minutes cut from its run time, while it was later released uncut theatrically in Japan. Warner Bros. finally released the uncut English version of the film in 2011 on DVD. 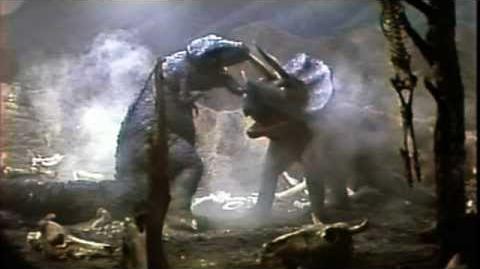