In the year 2008 all the world leaders are together at a G8 Summit meeting in Japan. Meanwhile, two Japanese journalists named Sumire Sumidagawa and Sanpei Toyama discover a hidden village full of worshippers. They are driven out as outsiders intruding on a sacred ceremony. Shortly after, A meteorite crashes into the heart of Sapporo and releases the monster Guilala. The monster rampages through Sapporo, leaving death and destruction in his wake. After levelling the city, Guilala transforms into a giant ball of fire and flies to Hokkaidō, making its way to the G8 Summit. The Prime Minister of Japan proposes cancelling the Summit for the safety of all involved, but the President of the United States convinces the other world leaders to personally stay and fight. Shortly after forming a world alliance, each leader stays to fight for their own reason.

Sumire and Sanpei are sent to get news on Guilala's rampage. However, their efforts are unsuccessful as other news groups are looking for big news on the monster. During the G8 Summit's efforts to stop Guilala, Sumire encounters a boy she saw at the village's ceremony. Believing that the village might know how to stop Guilala, Sumire and Sanpei return for answers. They find a carving of Guilala which they also notice is battling another monster. That figure is known as "Take-Majin," a deity the villagers worship. An ancient prophesy predicted that Guilala was going to destroy the world, but he would be stopped by Take-Majin, who would awaken to save mankind from Guilala. The little boy Sumire met earlier worshipped Take-Majin, after his father was killed in a landslide.

At the same time, the leaders soon discover the reason for Guilala's appearance on Earth was due to a Chinese satellite that fell out of orbit and was the crashed "meteorite" in Sapporo. Assisting the leaders is Dr. Sano, a Japanese scientist who discovers that Guilala is actually a cosmic spore attached to the Probe that was exposed to the Earth's atmosphere, causing it to grow into the monster. He also figures out that the crash caused Guilala to lose a lot of energy and it's searching for "high temperature" energy to recharge. The doctor doesn't think the monster will leave Japan until it finds the energy it needs. Meanwhile, Guilala arrives at the Noboribetsu Power Planet and sucks all of the energy out of the plant.

Hoping to trap Guilala, the Japanese set up an earthquake generator near the fictional "Mt. Showa" to draw Guilala to a magma flow and destroy him with a super missile known as "The Vulture". Guilala arrives to feed, but he swallows the missile whole when it's fired at him. Soon, other countries are scrambling with their own "super" weapons, but each one fails in comedic fashion. In the middle of all this the Japanese Prime Minister is waylaid by diarrhea and is replaced by Junzaburo Ohizumi, a former Prime Minister and a friend of the U.S. President. He arrives to help in the battle, but seems shifty. Ohizumi even suggests using nuclear weapons, but is stared down by the other leaders. After the Germans' super weapon fails to put him out of action, Guilala dances with the setting sun.

When Guilala's mind is damaged by a British brainwashing weapon, the monster begins a wild rampage. Ohizumi suddenly reveals that he is in fact the leader of North Korea. He stole Ohizumi's identity during a state visit. He reveals that the Japanese interpreters attending the G8 Summit are all his spies and they all draw weapons, taking the world leaders hostage. He also announces that he plans on using a "limited" nuclear warhead to destroy Guilala. Meanwhile, President Sorkozy of France has finally bedded the translator, who confesses her true identity. Clad only in a towel, Sorkozy creates a distraction, which allows Japanese soldiers to rush the spies. The North Country leader is captured but not before managing to launch the nuclear missile at Guilala. Dr. Sano announces that Guilala's spores are re-energized and that if the missile strikes it will spread Guilala spores worldwide.

Concerned with the planet's safety over their own, Sumire and a reluctant Sanpei participate in Take-Majin's awakening ceremony. Just when Take-Majin is about to wake up, the entire village is evacuated by the army when the nuclear missile is fired at Guilala. But Take-Majin suddenly awakens and stops the missile by catching it with his buttocks, allowing it to explode inside of him. He then confronts Guilala, preparing for battle. After a long battle Take-Majin is victorious, decapitating Guilala, and saving all humanity as prophecied. Take-Majin then disappears back into his shrine to sleep once again. The G8 Summit leaders celebrate their victory by taking a bath in a hot spring (despite the leader of North Korea escaping during the fight). 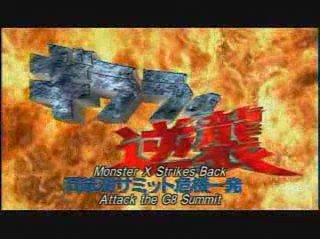 This is a list of references for The Monster X Strikes Back: Attack the G8 Summit. These citations are used to identify the reliable sources on which this article is based. These references appear inside articles in the form of superscript numbers, which look like this: [1]