The X from Outer Space (宇宙大怪獣ギララ?, Uchū Daikaijū Girara, Lit. Giant Space Monster Guilala) is a 1967 tokusatsu kaiju film produced by Shochiku Company Ltd. It was released to Japanese theaters on March 25, 1967, and to American television syndication via American International Television in 1968.

The spaceship AAB Gamma is dispatched from Japan to land on Mars and investigate reports of UFOs in the area. When the Gamma nears the red planet, it finds a mysterious UFO that begins to coat the Gamma with unusual spores. One of these spores is taken back to Earth, but begins to develop.

The spore grows into a giant lizard/chicken-like alien monster called Guilala that begins a rampage across Tokyo. It spits fireballs, feeds on nuclear fuel, turns into a giant energy ball when it wants to fly, and destroys airplanes and tanks along its rampage. The monster is finally defeated by jets dropping bombs, coating Guilala in a fictional substance known as "Guilalalium" that causes it to shrink back down to spore size. They promptly launch the spore back into space, where it will supposedly circle the sun in an endless orbit. 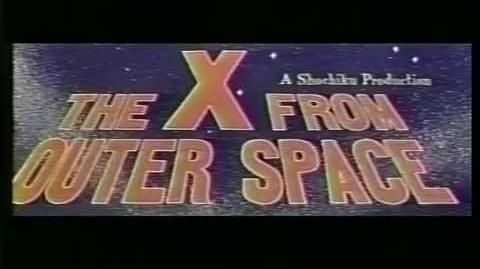 Retrieved from "https://godzilla.fandom.com/wiki/The_X_from_Outer_Space_(1967_film)?oldid=286356"
Community content is available under CC-BY-SA unless otherwise noted.