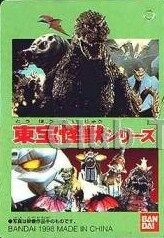 The Toho Kaiju (東宝怪獣,   Tōhō Kaijū?) series is the second line of 6-inch Godzilla figures by Bandai Japan. The line began in the same year as the Godzilla Island series, 1998.

This toy line features reissues of all the figures from the Godzilla Island series, their size and paint schemes are no different from the previous line. However, the tags for the Toho Kaiju figures have green borders and follow the same number order as the Godzilla Island figures. New pictures of each monster are used on the front, the Toho Kaiju tags and the year type of the suit is also included.

In 1999, Bandai Japan introduced Godzilla 1954 to the Toho Kaiju line. In 2001, Godzilla 1954 was reissued as event exclusives to celebrate Eiji Tsuburaya's 100th Birthday Anniversary. For two separate events, Bandai Japan produced a translucent grayish black vinyl Godzilla 1954 known as the "Smoke Godzilla" and a translucent brownish red vinyl Godzilla 1954 known as the "Sepia Godzilla". The tags are the same as the figures that were released in 1998, but for unknown reasons, no event exclusive stickers are found on either toy and the Smoke Godzilla does not have a Toho license sticker placed on the tag. The Sepia Godzilla does, on the other hand, have the Toho license sticker, but while it’s the same as the figures that were released in 1998, the date "2001" is found on the bottom of the sticker.

Retrieved from "https://godzilla.fandom.com/wiki/Toho_Kaiju_(Bandai_Japan_Toy_Line)?oldid=392527"
Community content is available under CC-BY-SA unless otherwise noted.