Toto (トト,   Toto?) is a giant turtle kaiju created by Kadokawa that first appeared in the 2006 Gamera film, Gamera: The Brave.

Toto's name might come from the English word "tortoise." In-universe, Toto is given his name by Toru after a nickname his late mother used to call him.

Toto first appeared in the movie Gamera: The Brave. He was first discovered by a boy who found his egg on an island. The boy took the egg home along with the red gem it was sitting on. The egg hatched into a baby turtle, and surprised the boy's neighbor when he started to fly. He became too big for the boy to take care of in his home, so he was taken to a shed on the shoreline. He disappeared the next day, but he returned to save the boy when Zedus attacked. He battled Zedus and defeated him, but he was captured by the military. Zedus arrived at the location where Toto was being held, and they fought in the city. Toto was thrown into a building and the boy brought him the gem his egg was found on. The gem gave Toto more energy, and he fought Zedus again. He destroyed Zedus' tongue, and he managed to kill him with a single powerful fireball from his mouth. He said goodbye to the boy and the other children with him, and flew away.

Toto is in the facility of Amemiya throughout the manga. The researchers try to find a way to help Toto to fight Zedus.

Toto's roar is an edited stock roar originally used for King Kong in the 1976 film rather than Gamera's unique roar. When he screams in pain a deer wail is used. 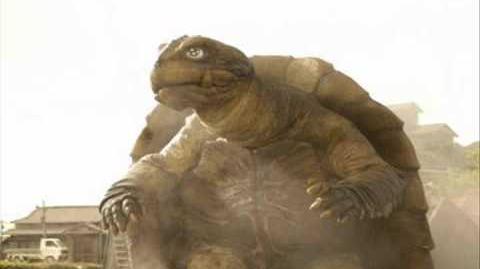 Gamera 2006 Roars
Toto's roars
Add an image to this gallery

Retrieved from "https://godzilla.fandom.com/wiki/Toto?oldid=304557"
Community content is available under CC-BY-SA unless otherwise noted.