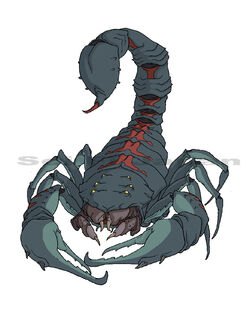 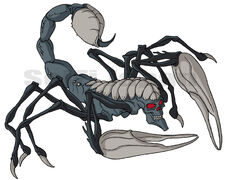 Ts-eh-Go and the Mutant Scorpions are products of a military project out in New Mexico. Ts-eh-Go is the "First Wave" of the project and the other scorpions are the "Second Wave". They got out of hand though and Zilla helped save everyone, but as soon as H.E.A.T. left a "Third Wave" was ordered into production.

Powers: - Acid: Ts-eh-Go and the mutant scorpions can fire streams of acid from his tail that can melt the skin off of just about any living monster. - Poison Stinger: Like all scorpions, Ts-eh-Go and his mutant brethren can stab his deadly stinger into a foe and inject them with a deadly dose of poison that will eventually lead to death. - Pincers: Ts-eh-Go has two gigantic claws which he can use in combat to crush bones and hold enemies.

Created by the United States army to combat the mutant threats, Ts-eh-Go was the first wave of a line of mutated scorpions headed by Colonel Charles Tarrington. The giant scorpion took down an airplane under command and soon Godzilla was on a direct march to the arachnid in New Mexico. While trying to understand why Godzilla was homing in on the base, they traced a strange, acidic fluid to an old hanger that was broken open. Ts-eh-Go quickly made an attack against H.E.A.T before Godzilla arrived to challenge.

With his hide to tough to penetrate with its stinger, Ts-eh-Go fled with Godzilla behind. Tarrington and his men then arrived, attacking Godzilla with their weapons before the reptile dove into the ground and vanished.

With Second Wave finished, Tarrington’s men turned on their first creation and attacked it. As the scorpion fought back, Godzilla arrived and was hit by the acid. It burned through his hide, allowing the super scorpion to sting him. Helicopters made their moves and fired at Ts-eh-Go, only to be shot down.

One of the downed machines crashed into the base and freed Second Wave. As N.I.G.E.L lead the smaller arachnids away, Ts-eh-Go prepared to finish off Godzilla. H.E.A.T tricked the scorpion into tipping over the water tower where it mixed with the soil to form mud. The mud, rich in healing chemicals, healed Godzilla like new.

With N.I.G.E.L destroyed, Nick grabbed the pheromone sample that was luring Second Wave and dropped it near Ts-eh-Go. The little scorpions, thinking the huge scorpion was now food, attacked. Trapped in streams of acids, Ts-eh-Go was powerless as Godzilla arrived and blasted both him and the smaller creatures with atomic fire, burning both waves of scorpions.

Retrieved from "https://godzilla.fandom.com/wiki/Ts-eh-Go_and_the_Mutant_Scorpions?oldid=25613"
Community content is available under CC-BY-SA unless otherwise noted.