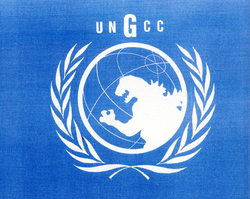 The United Nations Godzilla Countermeasures Center, or U.N.G.C.C., is a special branch of the United Nations founded in 1992. It was designed to bring together the most brilliant minds on Earth in order to devise defenses against Godzilla and to explore possible methods of finally killing the beast.

After the conflict between Godzilla and Mecha-King Ghidorah in 1992, Japan, as well as the United Nations, decided that something needed to be done. Within months, the U.N.G.C.C. was formally established, with its H.Q., the "G-Center", located in Japan. In addition, a military branch of the U.N.G.C.C., dubbed the G-Force, was also created. Other special branches, including a Psyonics Center, were also introduced in later years. After setting up, the U.N.G.C.C. set right to work, and assembled the most brilliant minds in the free world to devise a strategy to eliminate Godzilla once and for all. Their first means of defense had been attempted before: build a flying, fighting machine equipped with state-of-the-art weapons. From this concept, the U.N.G.C.C. scientists built an airship dubbed Garuda. However, Japan's two previous state-of-the-art flying machines, the Super X and the Super X2, had fallen before the might of Godzilla. Field tests of Garuda showed that it would, unfortunately, more than likely meet the same fate as its predecessors in the 1980's. However, fate had provided Japan with a way to "cheat" by using the technology of the future to protect themselves in the present. Godzilla's opponent in 1992 had been a cyborg, a monster gravely wounded and revived and enhanced in the 23rd century with advanced technology. While the beast, Mecha-King Ghidorah, had been killed in the final battle, the technology used to build the creature still lay on the bottom of the sea. With Garuda rendered useless, the U.N.G.C.C. salvaged the advanced technology of Mecha-King Ghidorah and over the next two years worked on converting the wreckage into a new machine designed specifically to fight Godzilla. By 1994, the end result was finally completed: MechaGodzilla. While the 120 meter tall robot proved relatively successful against Godzilla, in the end it was defeated, destroyed by the Monster King after the creature was revived by Fire Rodan. However, the U.N.G.C.C. did not give up, and within only one year they had converted MechaGodzilla's wreckage into yet another machine: M.O.G.U.E.R.A.. This machine, capable of splitting into two separate machines, was first deployed not against Godzilla, but against the mutant SpaceGodzilla. During the following battle, M.O.G.U.E.R.A. was forced to fight with Godzilla as opposed to against him. By the end of the conflict, only Godzilla stood; M.O.G.U.E.R.A. had been destroyed completely by SpaceGodzilla, and SpaceGodzilla itself had been killed by Godzilla. Over the next few months, plans for further anti-Godzilla measures were tossed around, but all action against the creature were halted in 1996, when it was discovered that Godzilla was undergoing a nuclear meltdown. Any combat situation or use of explosive weaponry could cause the beast to explode. However, the U.N.G.C.C. sought an alternative and created yet another mech, the Super X3, a flying machine equipped with freezing weapons. The Super X III was called to combat both the dying Godzilla and the monster Destoroyah, which it aided in killing. However, nothing could be done to prevent the event to come, and Godzilla finally melted down and died. However, the legacy of Godzilla was far from over, for the Monster King's adopted son, known as Godzilla Junior, survived the final battle between his father and the monster Destoroyah, and absorbed the excess radiation from the meltdown, mutating into a fully grown Godzilla and inheriting his father's crown as the new King of the Monsters.

Retrieved from "https://godzilla.fandom.com/wiki/United_Nations_Godzilla_Countermeasures_Center?oldid=331788"
Community content is available under CC-BY-SA unless otherwise noted.