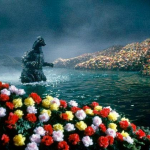 This wiki can be a lot of fun sometimes, but it's very hodge-podge and more than a little ridiculous. I'll try to help out where I can but I've got a lot of other stuff going on so I won't be able to do it all the time. Also there are things I just don't know how to do and I absolutely do not understand some of the unimaginably bizarre design choices this site has made. If it were my project, I'd tear this whole thing down and start over, but it isn't, so I'm trying to help within the system that's here and, as I've already said, I don't really understand that too well.

Reincarnated Godzilla baby is the best, of course. I don't have weird opinions about this, they're pretty boring. '54, '64, '84, etc. I like '68 a lot too, and the best version of the VS series design was the '89 suit. Like I said, none of this is interesting or new.

Outside of the films I quite like the "Age of Monsters" Godzilla by... was it Randy Stradley? Very strange and menacing looking creature without resorting to fangs and white eyes, although of course I like the GMK design too.

...some other things I guess. Angilas, all the Ghidorahs, Gigan, Hedorah, Gorosaurus, etc. Nothing interesting here either. I do like really weird monsters or ones that stick out as being odd, including the "nameless" creatures like Oodako and Ookondoru.

But what I'm really into are the monsters, especially outside of Godzilla's appearances, that get a little more room to move. Dogora, Matango, and Aerobot are the popular examples, but there are some amazing things lurking in the TV shows that have unfortunately gone ignored for no discernable reason. I'm talking about Moguranda, Achelon, Kamagidon, Moguranda, Grotogauros, Darkgeran, Zarigan, Reizaus & that whole group, Deadler, Moguranda, Mirror Monocle, Vonbaron, Moguranda, Deathball if he counts as a separate thing, and I don't think he does, Moguranda, Gilmaras, Zandolla, and of course Moguranda.

While a lot of the Zone Fighter and Megaloman monsters are thrown together filler, there's some really wild ideas in there, design and otherwise. Meanwhile the Choseishin monsters, while they're all gorgeous, have their own pieces of gold hidden away too, and I'm not just talking about the Hedorah, Megalon, and Moguera appearances.

But I haven't even mentioned all the monsters outside of live action film and television, there's also all those cool monsters from scripts and treatments and comics and the like. Like Barbaroi, Toho's version of the Thing, the invisible monster Chamelegon, Gamony the Sunerian Shogun, the recurring Archaeopteryx monster design, the fire-breathing, floppy-backed Anguirus of Kayama, etc.

Point is, there's too many damned awesome monsters.

Beyond the Bronze I stop counting. Hedorah might actually be my second favroite, but that might be heretical. Then again, Godzilla is dead, so who cares about that sort of thing anymore?

Retrieved from "https://godzilla.fandom.com/wiki/User:Vertigoconquers?oldid=193200"
Community content is available under CC-BY-SA unless otherwise noted.