Viras (バイラス,   Bairasu?) is an alien kaiju created by Daiei that first appeared in the 1968 Gamera film, Gamera vs. Viras.

Viras was the leader of an expedition force of Virasians, set upon conquering the Earth who chose not to disguise himself. An earlier attempt by his kind was easily thwarted by Gamera, so Viras employed a mind probe to discover Gamera's weaknesses. Viras discovered Gamera's kindness to children, and exploited it by kidnapping two Boy Scouts and using them as hostages, coercing Gamera to get into perfect position for the launching of the mind-control device. Gamera was then made to rampage through Japan, with the targets being the Okomasashi Dam and eventually Tokyo.

When the two boys were able to escape, Gamera attacked, and Viras fused with the other Virasians to become a giant. After a fierce battle, Viras was defeated when Gamera flew with him up into the atmosphere, where he froze solid. Gamera then dropped Viras, and he exploded violently after colliding with the ocean.

Like most of his fellow Showa era monsters, Viras has not appeared in any movies since his initial movie debut, save for a stock footage appearance in the film Gamera: Super Monster. In this film, he is one of Zanon's pawns. Inexplicably, the evil spacewoman Giruge refers to Viras as Zanon, despite the fact that this is both the same name as the alien controlling him, and the ship the alien pilots.

Viras' main attack is his constricting tentacles on both his body and head. He possesses a sharp beak and can make the tentacles on his head form into a spear-like point. He has no projectile weapons to speak of. He also has the ability to breath underwater and the ability to talk through telepathy.

Viras is susceptible to being frozen. Gamera kills him by flying him up in to the atmosphere and freezing him solid.

Viras made an appearance in the short-lived Gamera comic series by Dark Horse that was based on the Heisei Gamera movies. In this series, he was the product of experimentation with Gyaos DNA. He'd eventually face off against Gamera amidst the streets of Paris, France. In said comic series he looked relatively the same, except for more Octopus/Squid-like features. 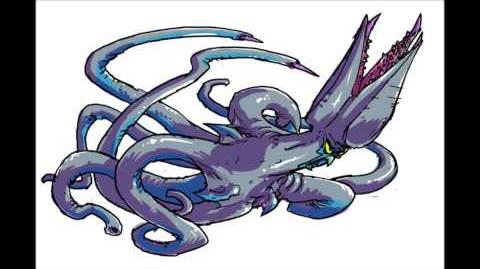 Viras Roars
Viras' roars
Add an image to this gallery

Retrieved from "https://godzilla.fandom.com/wiki/Viras?oldid=365064"
Community content is available under CC-BY-SA unless otherwise noted.