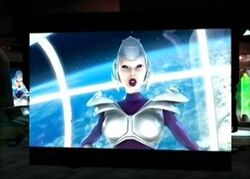 Vorticia is the queen of the Vortaak. She is one of the major antagonists of the Atari/Pipeworks Godzilla games. Not much of her past is known because of the two first games' little storyline, but she is probably from the planet seen in the Xbox version of Destroy All Monsters Melee.

In Godzilla: Unleashed, Vorticia wears a pair of bladed earrings and cape. One of the unlockable pieces of concept art is a sketch of her head, which points out her bladed earrings.

In Save the Earth, the Vortaak return and Vorticia makes her first appearance to Earth sending the Vortaak kaiju to attack Earth again, but Godzilla defeats the bigger army of monsters and passes numerous tests. The Vortaak flee as Vorticia screams.

In Godzilla: Unleashed, Vorticia returns to once again to invade Earth with her Vortaak army and their army of monsters (Gigan, MechaGodzilla, King Ghidorah, Orga, and Megalon). As the Vortaak Mothership approaches Earth, she monologues, stating they have risen from the ashes of defeat and have come to wrestle control of Earth from humanity. She is confident that the Vortaak's resolve and technology will overcome the GDF and Earth's monsters. However, an alarm sounds and a member of the crew alerts her that their ships sensors have detected an space anomaly on the ship's aft quadrant. Suddenly, an asteroid materializes from the anomaly. Vorticia orders evasive action but it's too late and they are hit by the asteroid. She asks for someone to give her a damage report and is informed that it has damaged the ship's number 3 repulsion engine and Vorticia is forced to call off the invasion while they make repairs. While gazing at the asteroids heading towards Earth, she wonders that if someone—or something—has their eye on her prize: Earth. While the ship is being repaired she sends alien monsters and her army to Earth and investigate the crystals spawned by the meteors.

Vorticia notices that Earth's monsters are gaining power from the power surge crystals and briefly wonders where they came from, before deciding that they should use them to strengthen their own monsters. She sends Vortaak monsters to Earth to steal the crystals, so that her own monsters will become more powerful.

In the "Invasion" mission, her men inform her that all the ships repairs are complete and they are ready to begin the invasion, she tells her men to activate the ships cloaking field and set a course for Earth. She gives the order to unleash their monsters and tells her army the time has come and for them to prepare to take Earth. The Mothership appears over San Francisco vanguarded by one of the Vortaak monsters. The Mothership is eventually destroyed, but she survives and continues to lead the Vortaak army and monsters against the other factions.

In the "Big Trouble" mission, her army has finally gathered enough crystal radiation to make King Ghidorah 'invincible' by having it achieve Critical Mass and unleashes it on the city Seattle. However, King Ghidorah is defeated by the player's faction.

In the Alien faction's default ending, following the defeat of SpaceGodzilla in the "Finale" mission, Miku states the Vortaak have won and all hope is lost, while Vorticia overlooks the now conquered Earth, laughing. Alternatively if an Alien monster collects every power surge, they become too powerful and ends up fighting the other Aliens in the downed Vortaak mothership. After defeating the other Alien monsters and breaking free of Vortaak control, it becomes the new dominate lifeform on Earth, and after reaching Critical Mass it faces off against the remaining factions' monsters, allowing the crystals to overrun Earth. Vorticia and the Vortaak's fate are unknown in this ending.

Retrieved from "https://godzilla.fandom.com/wiki/Vorticia?oldid=351028"
Community content is available under CC-BY-SA unless otherwise noted.