A small ship travels to a rotating space station. Aboard the station, a group of starfish-like beings discuss how to warn humans of an impending disaster, deciding on contacting Japanese scientist Dr. Kumara. Meanwhile, flying saucers are spotted over the skies of Tokyo, baffling scientists. A journalist tries to get a statement from Dr. Kumara about the sightings, but Kumara replies that there is not enough evidence to formulate a hypothesis. At an observatory, Professor Isobe spots an object in his telescope apparently releasing smaller objects.

Isobe discusses his findings with Kumara and a physician, Dr. Matsuda, who believes they should get photographs via a rocket. The photographs they retrieve, however, turn out to be unclear, though they deduce the object has a high energy output. In the meantime, the extraterrestrials have been unsuccessfully attempting to contact humans. They begin appearing in lakes and rivers, frightening local fishermen and sailors. One of the aliens manages to secure a photo of Hikari Aozora, a famous Japanese entertainer. Their plan is for one of the aliens to mutate into the form of Aozora. Back aboard the space station, one of the Pairan leaders, Ginko, volunteers herself. Her starfish form is slowly mutated into a human form.

On Earth, Toru, Isobe's son, discovers the disguised alien floating in the water. After her rescue, she exhibits superhuman characteristics such as jumping ten feet and materializing in different places without walking. Soon, she disrupts Dr. Matsuda's work on a nuclear device, explaining she understands the complex equations he was writing and warning against the effects of a device, leading him to believe she is not human. Shortly afterwards, as the team of scientists discuss her abnormal traits, the camouflaged Ginko appears and reveals her true identity, explaining she is from Paira, a world on the same orbit as Earth but on the opposite side of the Sun. She then continues to reveal her mission, to warn Earth of an imminent collision of a rogue planet, which is dubbed "Planet R" by the media. They appeal to the World Congress about the situation, but are swiftly rejected. Only after they show Planet R and its rapid acceleration in the telescope does the World Congress launch its nuclear weapons, which ineffectively explode on its surface.

In the meantime, a group of spies have abducted Matsuda and are attempting to steal his formula to the nuclear device the disguised Pairan warned him about. Matsuda does not comply and is eventually tied to a chair in a remote building. As the Earth's atmosphere heats up due to the approaching world, Ginko again arrives to learn why Planet R is not yet destroyed. They locate Matsuda through Pairan technology and gather the formula for the device. The scientists then all watch as the nuclear device is shot from the space station and destroys Planet R, cooling the atmosphere and removing the threat. Ginko then changes back to her original form aboard the space station.

Warning from Space wasn't released on Theaters in the US, but rather Television in the US. Also, in the US version was edited and adding more scenes into it.

Differences between the JP and US version 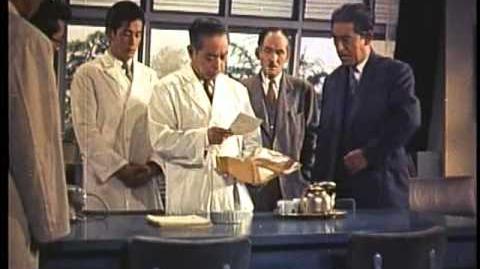