Start a Wiki
The Wolfman is a kaiju that appeared in the fan films Wolfman vs Baragon (1972) & Wolfman vs. Godzilla (1983). Both films were directed and produced by Shizuo Nakajima and several former Toho filmmakers.

In this short film, the Wolfman emerges from behind some trees. Pursued by the military, the Wolfman finds himself walking through a burning industrial site. At the same time, Baragon also appears at the industrial site. The two kaiju spot one another and soon begin to fight. The two charge at each other, but Baragon headbutts Wolfman to the ground. As he gets up and recovers, the footage fades out to black and we are shown images of Wolfman wrestling with Baragon and grabbing his tail.

The Wolfman begins as an ordinary human man, who transforms into a werewolf. After his transformation the Wolfman is shown carrying an unnamed woman when he is approached by the police. Through currently unknown means, the Wolfman later grows to the same size as Godzilla, who is also in Japan. The Wolfman does battle with Godzilla several times, once during the day and again during the night. The Wolfman is also lured by the military into an ambush at one point in the movie, though he survives the attack. 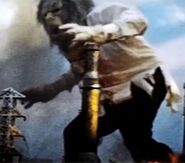 Wolfman in "Wolfman vs Baragon" 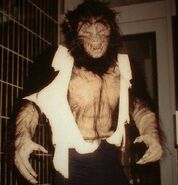 Retrieved from "https://godzilla.fandom.com/wiki/Wolfman?oldid=365121"
Community content is available under CC-BY-SA unless otherwise noted.