Wrath of Daimajin (大魔神 逆襲,   Daimashin Gyakushû?, lit. Daimajin's Counterattack) is a 1966 tokusatsu kaiju film produced by Daiei Film Co. Ltd. It is the third and last film in the Daimajin trilogy.

The third and final film of the series, the same statue from the previous two Daimajin movies is located on the top of a mountain rather than on the side of it. The fathers of some local children were captured by an evil warlord and forced to work in his labor camps. When four of the children whose fathers were captured decide to rescue them by crossing the Majin mountain where the stone Daimajin statue is hibernating, a notoriously rough and dangerous area full of treacherous terrain, rough weather, evil samurai and Daimajin himself. The four boys are smart enough to pay their respects to the statue when they pass by it so it wouldn't come to life and kill them. Eventually, the warlord's men anger the statue, who once again comes to life and destroys everyone who haven't been paying homage and respect to him. The children and their fathers are spared, mostly because of the event before, as the labor camps are destroyed. 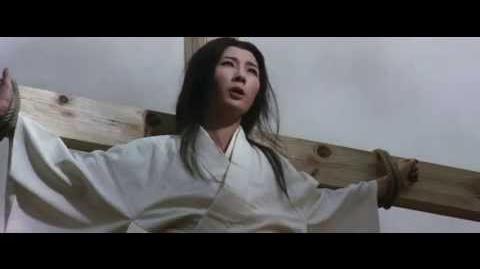 Retrieved from "https://godzilla.fandom.com/wiki/Wrath_of_Daimajin?oldid=286387"
Community content is available under CC-BY-SA unless otherwise noted.