Zigra (ジグラ,   Jigura?) is an alien fish kaiju created by Daiei that first appeared in the 1971 Gamera film, Gamera vs. Zigra.

Zigra is a deadly opponent whose appearance is similar to that of a Goblin Shark, possessing a silvery gray, armor-plated hide, a pointed nose, a row of sharp fins on his back, as well as sharp pectoral fins.

Zigra is an alien creature hailing from a distant planet where fish feed on people. Zigra traveled to Earth in a spaceship with the intent of destroying Gamera and enslaving the human race.

Albeit briefly, a version of Zigra appears in the manga remake of Gamera vs. Barugon, described as being one of many genetic creations of the Atlanteans made to combat the Gyaos alongside Iris, Barugon, and Jiger. They were all ultimately discarded in favor of Gamera.

Zigra invaded the Earth with the intention of enslaving the human race and raising them like cattle. Like Viras attempted three films earlier, Zigra held a pair of human children hostage in order to force the human race to conform to his plan, but Gamera engaged him in battle. Gamera eventually threw him on land, using a rock to play his theme song on Zigra's dorsal fins like a xylophone before setting the alien shark ablaze with his fire breath.

In Gamera: Super Monster, Zigra fought with Gamera again in one of the many stock footage scenes. When Gamera hits his back with the rock, his theme song is not played, and is instead replaced by a new, simple tune. Zigra's fate is left unknown, as Gamera is never shown defeating him.

Zigra's attacks are almost all based around his blades on his back, head and, fins. His great speed and agility allows him to easily dodge Gamera's attacks and out-maneuver him. But Zigra's weakness is that because of his aquatic adaptations, he becomes far slower outside of the water. Zigra can also shoot three types of beams from the gem between his nose (orange beam to paralyzes and make the opponent asphyxia by stopping cell functions, green beam to truck and teleport objects at will, and red destructive bream/heat ray which also cause gigantic earthquakes of more than magnitude 12) . In the Gamera: The Guardian of the Universe, Zigra fired tri-colored beam as a weapon.

When out of water, Zigra can convert his underside into legs and stand, gaining the ability to slap opponents with his fins or jab them with spikes. In this form, Zigra can fall flat on his stomach and use his fins as wings to fly back into the nearest available water.

Zigra appeared in Dark Horse's Gamera: The Guardian of the Universe comic series, set after Gamera: Guardian of the Universe. In the story, Zigra was an escaped alien creature from outer space, who managed to find his way onto Earth. He eventually encountered Gamera, who made relatively short work of him. In this series, Zigra was pretty much unchanged from his film appearance, except for the fact he was more of a wild animal, and was more aquatic-based.

Zigra makes a brief one-panel appearance alongside Jiger and Iris in Kadokawa's Gamera vs. Barugon manga, which is set between the events of Gamera 2: Attack of Legion and Gamera 3: Revenge of Iris. 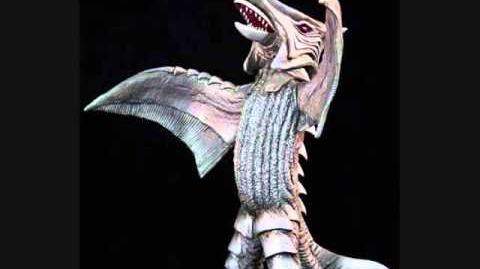