The 1998 incarnation of the monster is called "Godzilla" in the film, and is still legally trademarked under that name in all media released prior to Toho acquiring the rights to the creature in 2004.

Toho has declared that any subsequent appearances of the 1998 character will be under the name "Zilla," because according to Shogo Tomiyama it "took the 'God' out of 'Godzilla.'"[1]

Physically, Zilla resembled a giant-sized, flesh-eating dromaeosaur, with some inspiration from iguanas. He has a rough, square-shaped underbite and a pronounced chin, a long neck, large, fin-shaped scutes[2] (which differ greatly from Godzilla's maple leaf-shaped dorsal plates).

He also possessed long, powerful legs and arms. He also possesses a seemingly vestigial toe, on the back of, and three dinosaur-like toes on the front of each of its 13.7-meter-long feet.

Zilla reused the 1998 Godzilla's roars, albeit they were slightly altered for the film. In Godzilla: Rulers of Earth, Zilla's roar is written as "SKREEEEEENK."

Zilla Roars
Add an image to this gallery

In Godzilla: Rulers of Earth, he retained many of the same abilities and characteristics of his 1998 counterpart, although he lost his cowardly nature. He faced Godzilla head-on once again, evaded his attacks, and landed several attacks of his own. However, he retreated to the sea when Godzilla was close to killing him and he had just barely escaped Godzilla's grip. When Zilla resurfaced for the final battle against the Trilopods, he attacked and viciously killed and wounded multiple Trilopods.

Zilla's origins go unexplained in Godzilla: Final Wars, and he is never even mentioned by name in the film. According to supplementary materials for the film, Zilla is a monster "closely resembling" a monster that attacked New York City in 1998 and may be the same creature, though this is "unconfirmed," an obvious inside-joke referencing the 1998 film.[3]

In Godzilla: Rulers of Earth, Zilla's origins are never directly discussed, but it is established that he is part of the natural balance of Earth, along with all of the other Earth kaiju. Zilla's appearance on the Infant Island mural suggests that he is an ancient creature, instead of a mutated iguana like his previous incarnations.

In Godzilla: Final Wars, Zilla is one of the monsters controlled by the Xiliens, and under their control he attacks Sydney, Australia. The towering reptile topples down buildings, chomps on vehicles, incinerates a crowd with his acidic flame breath, and even eats a couple of civilians.

Then suddenly, the Xiliens teleport the reptile and the other monsters around the world. They tell the humans that they took the monsters away to save Earth. However, the humans find that the Xiliens were controlling the monsters and the Xiliens release all the monsters again to finish destroying the cities they were attacking. When Godzilla is freed from the south pole and defeats the Xilien warrior Gigan, the alien leader's re-release Zilla in Sydney to do battle with Godzilla. He is defeated rather quickly by Godzilla himself, who sends him flying into the Sydney Opera House and finishes him off with his atomic breath. The battle was the shortest in the Godzilla series.

Critics have said that this short battle was meant to show Toho's displeasure towards Sony and TriStar with their handling of the Godzilla franchise.

This creature was shown to be extremely agile and fast.

He also has shown a remarkable burrowing ability, able to excavate the thick tar and concrete with ease. This ability is present with Zilla in Godzilla: Rulers of Earth, which allowed him to evade and ambush Godzilla.

In Final Wars, Zilla is said by director Ryuhei Kitamura to possess an "acidic flame breath." This is most likely a variation of his previous incarnation's power breath, but it is never seen in use, only hinted at when Zilla emerges from behind an explosion similar to the one caused by Godzilla's power breath in the 1998 film.[4]

In Godzilla: Final Wars, Zilla does not exhibit a great deal of strategy, as he (perhaps foolishly) attempts to attack Godzilla head-on, only to be swatted into the air and quickly reduced to a pile of ash by his atomic breath.

In Godzilla: Rulers of Earth, however, Zilla seems to regain the 1998 Godzilla's intelligence, as he exhibits strategy in his battle with Godzilla, using his burrowing ability to evade a blast of Godzilla's atomic breath and even pulling Godzilla into the military's line of fire to use him as a shield while the latter is grappling him.

When Zilla realizes he has no chance of winning the fight, he waits for an opportunity and escapes to the ocean while Godzilla is distracted. Zilla later somehow manages to avoid capture by the Trilopods when they attack the Monster Islands, and knows to travel to Los Angeles to join forces with the other Earth monsters and battle the Trilopods.

In Godzilla: Rulers of Earth, Zilla displayed the ability to use his scutes as a weapon. Zilla ran at a Trilopod and bent downward, causing his scutes to slice its neck.

According to an interview with Simon Strange conducted by Chris Mirjahangir from Toho Kingdom, Zilla was in fact considered for the game, but due to lack of popularity from fans who said that "his inclusion would ruin the game," Zilla was scrapped.[5][6] 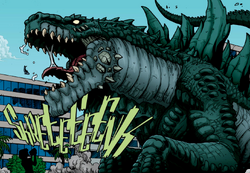 Zilla appears in the first issue of Godzilla: Rulers of Earth as a rogue kaiju. He is first sighted by a submarine which mistakes him for Godzilla. He later makes landfall in Honolulu, Hawaii and is given the identification as "Zilla" due to radio interference. He then goes on a rampage while fighting the CKR forces stationed there before being attacked by Godzilla, who has also arrived, and the two monsters prepare to fight. Godzilla tail-smacks Zilla into a building and blasts him with his atomic breath, similar to the way Godzilla finished him in Godzilla: Final Wars. However, Zilla burrows underground and avoids the blast. Zilla then digs behind Godzilla and ambushes him. Godzilla and Zilla engage in a heated physical battle until Godzilla grabs Zilla by the neck and chokes him. Before Godzilla can kill Zilla, CKR opens fire on Godzilla, distracting him long enough for Zilla to escape to the sea.

In this series, Zilla bears more of a resemblance to his 1998 Godzilla design as opposed to his 2004 Final Wars design. Although any real powers have yet to be seen, he appears to have an extremely thick hide as implied to him sustaining multiple hits from artillery fire. He also is very quick and actually does not run away strictly like his 1998 film incarnation, but instead has an attitude more like the animated series incarnation, not running away until Godzilla almost kills him.

Zilla returned in the final issue, where he suddenly appeared in Los Angeles and saved Jet Jaguar from a Trilopod with Godzilla's characteristics. Zilla then took part in the final battle against the Trilopods alongside Godzilla and the other Earth monsters, managing to injure and kill several of the creatures. Zilla attempted to battle Magita, the gigantic Trilopod queen, but was kicked aside by its massive legs. After Godzilla destroyed Magita, Zilla and the other monsters followed Godzilla out to sea.

Zilla against Godzilla on the cover for issue #2 of Godzilla: Rulers of Earth, with Zilla bearing the same design as the 1998 "Godzilla" as opposed to the 2004 Zilla

Zilla in Godzilla: Rulers of Earth

A soldier identifying the creature as Zilla

Zilla in Godzilla: Rulers of Earth #13

Zilla in Godzilla: Rulers of Earth #25
Add an image to this gallery

Zilla appeared at the very end of the fourth issue of Godzilla: Oblivion, where he emerged from an interdimensional portal alongside Biollante, Rodan, Mothra, Anguirus and King Caesar. In the following issue, where Hedorah joined the monsters, Zilla wandered off and rampaged through the city on his own while most of the other monsters tried to battle Mecha-King Ghidorah. Later, after Mecha-King Ghidorah was defeated by Godzilla, all of the monsters were left behind as the humans left the Earth as it became covered by tiny robotic cells that served as interdimensional doorways.

Retrieved from "https://godzilla.fandom.com/wiki/Zilla?oldid=304655"
Community content is available under CC-BY-SA unless otherwise noted.